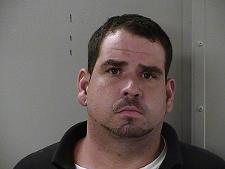 A man who admitted to police that he sold both meth and heroin has been arrested at the Select Inn on South Church Street, according to a Murfreesboro Police report. The arrest happened when police visited the hotel to see if they could locate a subject who had active felony warrants.

Contact was made with 30 year old Geoffrey H. Barrett who allowed police to enter his hotel room. Once inside Barrett gave officers a half gram of heroin that was in four paper wrappers. He also gave up approximately one gram of meth that was inside a dollar bill.

When questioned, Barrett allegedly told officers that he sells meth and heroin for $20 per every "Point" one gram.

The Sulpher Springs Road resident was charged with possession of a schedule one and two drug and also served a "Violation of Probation" warrant. He was booked into the local jail under a $12,000 bond.