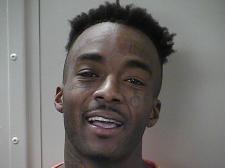 What may have amounted to a minor charge turned into something a little more serious for a Madison, Tennessee man visiting Murfreesboro.

Officer Reginald Primas wrote in a report, "I observed a silver BMW cross three lanes of traffic to get into the left turning lane without using a turning signal while on Middle Tennessee Boulevard near South Church Street." After the local officer observed the lane change, he pulled over the car over.

As the officer approached the car he noted, "I detected an odor of FRESH MARIJUANA." Driver Christopher A. Davis was then asked to step out of his Beamer.

When asked if anything illegal was in the car, the 25-year-old man said "No." But, due to the smell of weed, Officer Primas was able to conduct a Probable Cause search. It was during that search that Primas noticed the suspect chewing on something. When asked what Davis was chewing on, "He stated that he had just eaten Hardees."

The Murfreesboro Officer asked Davis to open his mouth and show his tongue and the report stated, "The substance appeared to be consistent with marijuana." The substance in the subject's mouth was also similar to what fell to the ground when Davis exited the vehicle, which was believed to be a small amount of marijuana.

As a result of Davis allegedly chewing up evidence at the scene of the traffic stop, he was charged with tampering with evidence. He was also charged for the second time for driving on a revoked license and possession of a schedule six drug.

Davis will appear in court in February of 2018.