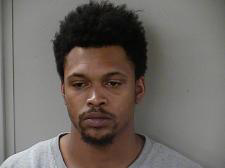 Several cellphones, jewelry and marijuana were recovered after a Murfreesboro man eluded police while driving down neighborhood streets and into Chariot Pointe Apartments. The subject was also said to have swerved to miss three juveniles and to have driven in the oncoming lane of traffic. The incident unfolded on Wednesday afternoon around 4.

Police eventually caught up with 25 year old Emmanuel L. Ford who stopped at a gas station on Lascassas Pike where he was found to be hiding in the restroom. Officer Palmer Gibbs used the gas station key to open the door and noticed that he allegedly dumped marijuana into the toilet. As a result of flushing most of the weed, he was charged with "Tampering with Evidence."

Ford who is homeless, was also charged with Reckless Driving, Driving on a Revoked License, Simple Possession of a Schedule Six Drug and Possession of Drug Paraphernalia. Multiple cellphones and jewelry found in his car were taken in as evidence along with an ID Card that did not belong to him.

The man is scheduled to appear in court on August 3, 2016. He is currently behind bars at the Rutherford County Adult Detention Center in Murfreesboro. The green Mercury Marquis that Ford was driving was towed away from the scene after he was arrested.