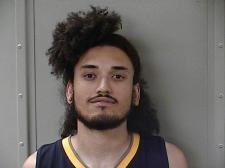 Regardless of how many feel about marijuana being legalized in the Volunteer State, the fact that it remains illegal means that the arrests involving the green leafy plant will continue.

The alleged drug dealer of marijuana evidently told the arresting officer, "That he is a good person that is simply trying to provide for his family."

Murfreesboro Police stopped 20 year old Andre M. Griesinger after spotting him acting nervous and then realizing he was driving on a suspended license. During the stop, Officer Wesley Hall noted the smell of marijuana in the SUV. Upon searching the vehicle, police found a duffle bag containing four bags of marijuana along with a sock containing weed. Officers also located drug paraphernalia.

Once at the jail, Griesinger signed paperwork to allow for police to search his phone.

The Northfield resident will face the courts this June. He was charged with the felony sale of marijuana, possession of drug paraphernalia and driving on a suspended license.