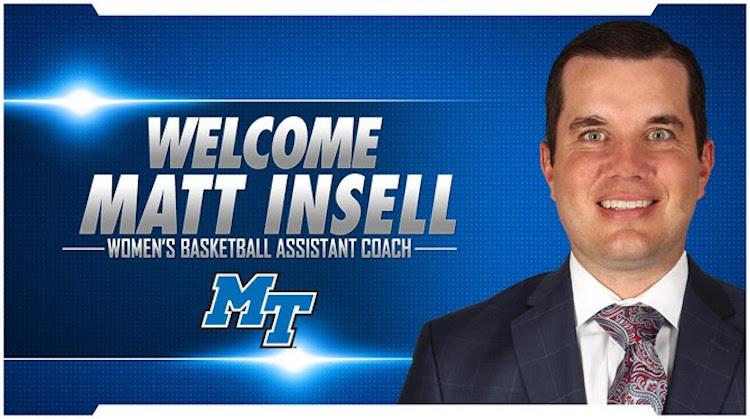 The alum is also the son of head coach Rick Insell. Matt Insell spent the previous 10 years coaching women's basketball in the Southeastern Conference. He served as head coach at Ole Miss from April 2013 to March 2018. Prior to his stint at Ole Miss, Matt Insell was as an assistant to Matthew Mitchell at Kentucky for five seasons.

"We are excited to add Matt to our coaching staff," Middle Tennessee Head Coach Rick Insell said. "He brings to our program a wealth of coaching experience and a strong background as a recruiter. I believe we are adding a terrific coach who has been a head coach in the SEC to an already solid staff."

"I look forward to this opportunity to come back home to my alma mater," Matt Insell said. "I am excited to work at a place that I am passionate about and not only women's basketball, but all of the athletic programs and the well-being of all the programs."

Matt Insell guided the Ole Miss women's basketball program to two postseason tournaments in his five seasons there. He also coached his team to six wins over Top 25 opponents during his tenure. During his time at Kentucky, Insell was part of a staff that led Kentucky to four NCAA Tournament appearances in a five-year span, reaching the Elite Eight three times (2010, 2012, 2013).

Known as a top-flight national recruiter, Matt Insell recruited 10 McDonald's All-Americans to Kentucky, which had three signing classes ranked in the Top 10 and four in the Top 15, during his time in Lexington. The 2009 and 2012 classes were each ranked as high as fifth nationally.

The recruiting savvy continued at Ole Miss, where Matt Insell's first two classes were ranked in the Top 30 nationally despite inheriting a program under NCAA Probation. His 2015 class was ranked 16th nationally and second best in the SEC, while still under NCAA Probation. The 2017 Ole Miss signing class included the No. 5 rated junior college prospect and 76th ranked high school player nationally.

"Recruiting is the lifeblood of the program," Matt Insell said. "Without players, you can't be successful. My work ethic will be the same as when I was at Kentucky and Ole Miss. Our objective is to sign some of the top high school players in the nation every year. I have to find players that fit Coach (Rick) Insell's system and get those players here. I think it would be great to have a Top 10 signing class at Middle Tennessee. I think it would be great to sign a McDonald's All-American at Middle Tennessee. Those are not goals, they are objectives.

Matt Insell began his career as Director of Basketball operations at Louisiana Tech in 2007. Previously, Matt Insell served as Nike Club Director for Tennessee Flight and student assistant coach for men's basketball at the University of Tennessee.

Matt is married to the former Autumn Clark.