As an aviation electronic technician, he assisted a helicopter squadron, working with equipment that would blow up enemy mines in the Middle East.

Saturday, Aug. 8, Howard will graduate with a bachelor's degree from the College of Mass Communication. Unlike technology that would blow up enemy mines, his forte has been in video and film production in electronic media communication.

Starting with the first Stole Ceremony in May, MTSU began to honor its graduating veterans with a formal ceremony in front of family, friends and university administrators in Cantrell Hall of the Tom H. Jackson Building.

"It's great," Howard said of the honor bestowed upon the veterans by MTSU. "It lets you know you're appreciated. Every single veteran and active-duty personnel sacrifices selflessly, but it's nice to be recognized and know your peers and (academic) scholars are there to support you."

Howard and the others received red stoles to wear with their cap and gown at commencement.

"When you walk across the stage with hundreds of other graduates, it's your chance to be recognized," he said.

Detroit native Kendra Buster, who will graduate and then pursue her master's degree in professional studies, said "distinguishing the veterans is an honor considering the ups and downs we have." 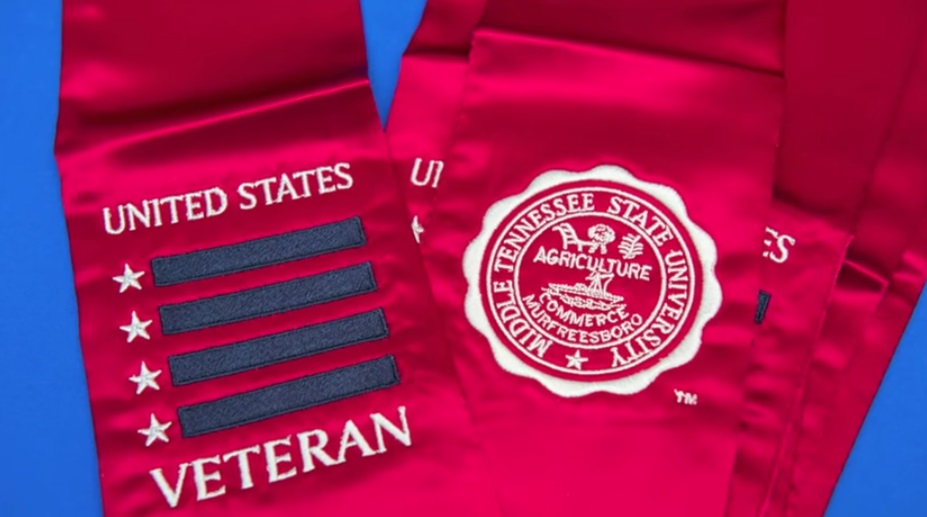 Buster was active duty in the U.S. Army.

Accompanied by wife Amber and daughters Lizzy Jo, 2, and Olivia, 2 months, Charles Buntin said it was "nice to have the university recognize our service."

"I definitely would recommend any veteran come here," added Buntin, who served as a military science professor while pursuing his sports industry degree. "They (MTSU) understand how to help us back into the college environment."

Student-veteran Lori Terry, 57, of Smyrna, Tennessee, has earned her Master of Business Administration from the Jones College of Business. A former air crew life support member in the U.S. Air Force, Terry said she's "honored they do this for the veterans and grateful to all the other veterans as well."

MTSU President Sidney A. McPhee told the recipients they had "honored us with your service to our nation. You have honored us by choosing MTSU for your higher education. And, today, you honor us yet again by allowing us to show our gratitude and thanks for the milestone you will reach at Saturday's commencement ceremonies."

During the event, McPhee shared news and renderings regarding the new Veteran and Military Family Center, a one-stop shop for student-veterans that will open in November.

Provost Brad Bartel said the academic side of campus is "looking at new degree programs tailored to your needs and gear you toward success." He added that by attending and now graduating from MTSU "you have become part of the economic and social engine."

Keith M. Huber, senior adviser for veterans and leadership initiatives, called the student-veterans "precious heroes. Your service is a constant -- a reason to celebrate this moment."