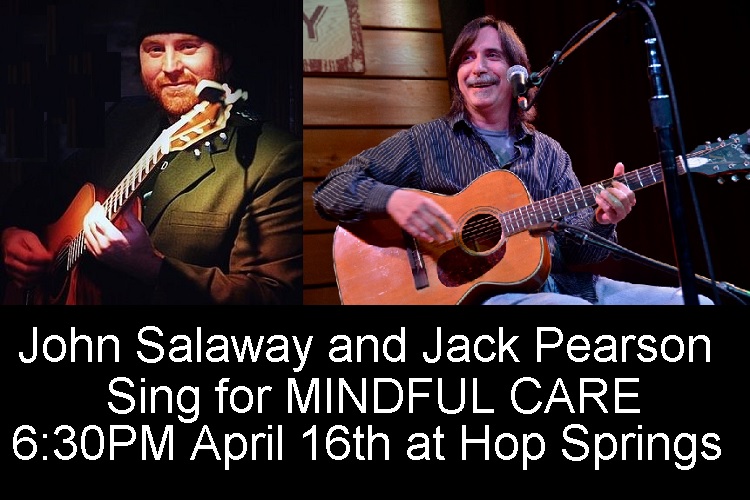 (MURFREESBORO) The Mindful Care Spring Bash Benefit will take place Thursday, April 16, at Hop Springs, located at 6670 John Bragg Highway. The event begins at 6:30 p.m. with live music, appetizers and door prizes. Your registration with Eventbrite will earn you one free beer ticket!

Admission is free with a $25 suggested donation to support Mindful Care's Music Therapy Program, bringing the healing powers and stimulation of music to elders with aging and memory issues. To donate at the door, you may swipe your credit card or give through Venmo.

Live music will be provided by Jack Pearson of The Allman Brothers Band and indie artist John Salaway.

Guitarist, singer, songwriter, producer, and session-musician, Jack Pearson is best known as an A-list blues/rock lead and slide guitarist but is also a soulful, creative songwriter and artist in his own right. During his 40-year career, he has mastered a wide range of instruments including electric, slide, acoustic and resonator guitar, mandolin, old time banjo and Hammond organ, which he incorporates into many musical styles. He was a member of The Allman Brothers Band from 1997-1999 and has worked with music legends, including Vince Gill, Jimmy Buffett, Earl Scruggs, Amy Grant, Mike Snider, Faith Hill, Ronnie Milsap, Jimmy Hall, Lee Ann Womack, Martina McBride, Trace Adkins, Eric Church, and John Hiatt.

Since moving to Nashville in the early 2000s, John Salaway has become one of the city's most accomplished musicians, holding down a weekly residency at the world-class BB King's Blues Club while also playing shows with acts like Peter Frampton, Ben Folds, Anderson East, Zach Williams, and Denny Laine from the Moody Blues and Paul McCartney's Wings. He's a drummer, guitarist, and pianist. His 2019 album Americana Dreams shows the full range of his abilities, mixing a lifelong appreciation for the Beatles' classic pop melodies with the southern-fried sounds of his adopted hometown.

Hop Springs, Ann Hoke & Associates, and John Salaway are the event's presenting sponsors. For more information about the event, please contact Tom Tozer at ttozer@comcast.net or Cindy Jones at ciny.jones@gmail.com.

There are 5.5 million people nationwide afflicted with Alzheimer's-- more than 3,000 in Rutherford County. In 10 years, those numbers will double. Seventy percent of those are being cared for at home. Mindful Care is a life-preserver for the person with dementia and a lifesaver for the caregiver.

Mindful Care, founded in 2005 as Elders First Adult Day Services, is a non-profit organization established for the purpose of operating a day program for persons with Alzheimer's disease and other frailties of age. Mindful Care operates out of New Vision Baptist Church on Thompson Lane, five days a week, from 8:00 a.m. to 5:00 p.m. For more information, visit www.Mindful-Care.org.