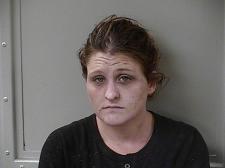 The case of a missing 30-year old woman has been cleared, along with a vehicle theft in Murfreesboro after her arrest. According to Murfreesboro Police reports, Detective Sam Day made contact with Amber Gordon on the phone after she'd reportedly advertised on Backpage. That's a classified advertising website, often used for adult ads.

Arrangements were made to meet the woman in the Publix parking lot on Franklin Highway around 4:30 Saturday after her name popped up as a missing person. Gordon was alleged to be driving a 2013 Nissan Altima reported stolen.

A traffic stop was initiated and Gordon was taken into custody without incident. A small amount of heroin and drug paraphernalia were also found.

The vehicle's owner took possession of the vehicle and the missing person's case closed. Gordon was charged with theft over 10-thousand dollars, possession of a schedule one drug and drug paraphernalia. She will be in court November 8th. A check also revealed active warrants out of Coffee County for Gordon.