MT Football Settling in the Bahamas 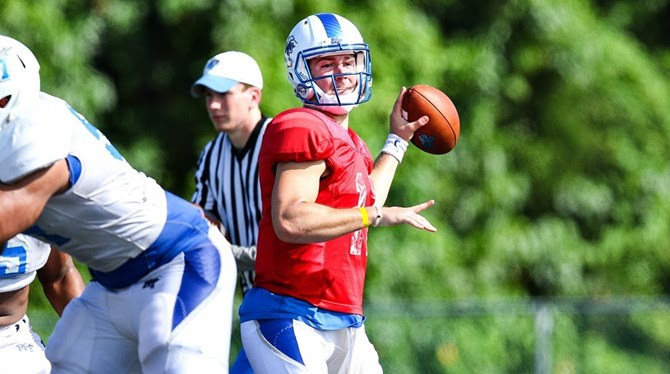 The Middle Tennessee football team is setting into their routine in the Bahamas. Chip Walters has more from Nassau on what the team is doing...

With temperatures hovering near 80 degrees, a light breeze and clear skies, Middle Tennessee conducted its first-ever football practice in the Bahamas Monday morning in preparation for Thursday's Popeyes Bahamas Bowl.

The Blue Raiders will kick-off against Western Michigan at 11 AM Central on Thursday and the game will be on NewsRadio WGNS.

"This was like a Wednesday practice so it was physical," said Head Coach Rick Stockstill. "I was pleased with the work we accomplished today. They had a good attitude, worked hard and pushed through it. We implemented the game plan last week so now we are just refining everything. The weather was great and I loved our intensity and focus."

"I thought it was a great day," said Brent Stockstill. "Guys were flying around and in good spirits. I think we were all ready to get back out on the field. We mainly just cleaned some things up so we can be fully prepared for Thursday."

After practice, MT coaches and players had some time off to enjoy all of the amenities the Atlantis resort had to offer. Beautiful weather, beaches, pools, and of course, the famous water slides.

To cap off the day, the Blue Raiders and Broncos had their Beach Bash, a cook-out style meal on the beach surrounded by music and various games for the two schools to compete. While many players from each side traded shots on the sand volleyball court, others tried to get involved in as many games as possible. Following the bash, players had free time for the rest of the night.

The Blue Raiders will enjoy an early breakfast and meetings tomorrow morning before heading to Thomas A. Robinson National Stadium for a 10 AM Eastern practice. It will be the team's first look at Thursday'sgame field.