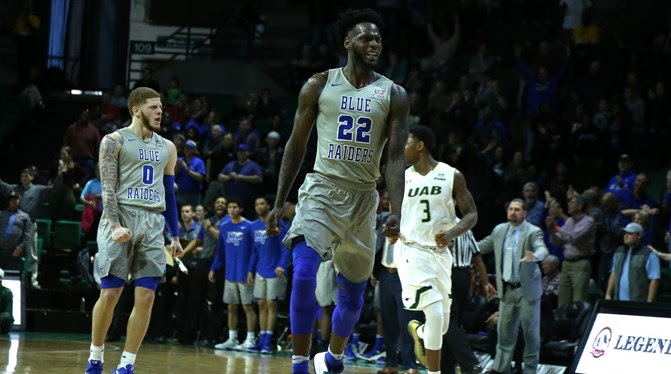 It was the perfect ending to a homecoming game for Middle Tennessee senior and Birmingham native JaCorey Williams, knocking down a game-winning jumper from the free throw line with four seconds left to defeat UAB, 66-64."It was an incredible feeling," Williams said following his 15-point, five-rebound performance. "I'm just thankful that my teammates trusted me to have the ball in my hands. I practice that shot every day so it meant a lot to have that opportunity."The Blazers got off a three that would have won the game, but it bounced off the back of the rim as the buzzer sounded to give the Blue Raiders an outright Conference USA regular season championship."This whole week prepared for this to be a game we would have to grind out," fellow senior Reggie Upshaw said. "Our experience played a big role in today's win."They were contesting shots at the rim. They were very physical and that's what makes them such a good team."The Blue Raiders got off to a slow start in Birmingham, going down 4-0 before a quick timeout by Davis and then trailed 10-5 before reeling off a 16-2 run.Xavier Habersham came off the bench to provide nine points on 3-of-3 from beyond the arc in the run while Upshaw provided the other seven points during the stretch.Upshaw finished with a team-high 19 points on 8-of-14 shooting and 3-of-4 3-pointers. He had six boards, three assists, two steals and a block as well.UAB held MT to 11 points over the final 10 and a half minutes of the first half and cut the lead to three at 32-29 going into the break.Habersham and Upshaw combined for 18 points in the first half with nine each, while the Blue Raiders were 6-of-14 from three and held UAB without a triple in the opening 20 minutes.Middle Tennessee scored first to open the second half with a Williams jumper from just inside the 3-point arc, but never opened up more than a 5-point lead before back-to-back UAB 3-pointers put the Blazers in the lead for the first time in nearly 20 minutes.A back-and-forth affair ensued from that point on as six lead changes occurred and the Raiders and Blazers tied things up six different times.A Denzel Watts 3-pointer out of the final media timeout looked to give UAB the momentum and caused the Bartow Arena crowd to erupt, but Upshaw's third triple of the day with 1:46 to go pushed the score to 64-64.Neither team converted the next time down and back, and after another UAB miss was brought down by Williams the Blue Raiders milked as much clock as they could with just two seconds separating the shot clock and game clock before the game-winning shot went down with four seconds remaining."We got just what we expected out of UAB today," Head Coach Kermit Davis said. They were picked to win the league and today they played like it."For JaCorey to come back to his hometown and hit the game winner was really fitting."Habersham finished the day with nine points while Giddy Potts added seven points and six rebounds. Freshman point guard Tyrik Dixon finished with five points, fice assists and four rebounds."Our fans made the difference today," Upshaw added. "Without them the big shots we made wouldn't have happened. We really appreciate our fans helping us get this win."Middle Tennessee returns home with a guarantee of playing in the NIT already solidified, but all eyes remain on a return trip to the NCAA Tournament.The Raiders play host to FIU on Thursday and Florida Atlantic for Senior Day on Saturday before going back to Birmingham to defend their 2016 Conference USA Tournament Championship.