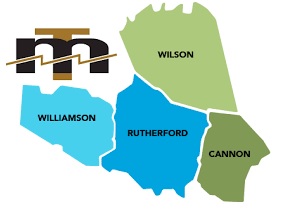 The agreement provides for the acquisition of Electric Department's assets from the City of Murfreesboro and the merger of its operations into those of Middle Tennessee Electric. The agreement calls for a total payment of $302 million over fifteen years.

The merger, which would combine the two Murfreesboro-based electric distribution systems, must still be approved by the Tennessee Valley Authority (TVA), the nation's largest power provider and the generating utility that provides wholesale electricity to each. TVA also provides regulatory oversight to local distribution utilities.

Upon Board's approval to acquire the City's Electric Department, MTE's Board Chair Mike Woods said, "We are both excited and gratified to take this step in combining these two great operations - excited for the efficiencies and opportunities it creates and gratified that the leadership in the City Council and City Hall have seen fit to trust Middle Tennessee Electric to continue the tradition of providing affordable electricity and excellent service to the citizens of Murfreesboro."

Murfreesboro City Manager Craig Tindall talked about the decision to come together with MTE, "We determined this situation presented a unique opportunity for both parties. The Electric Department and MTE have called Murfreesboro home for more than 80 years, oftentimes providing electricity to customers directly across the street from each other. Both utility providers have done superior work for their customers for many decades. Transferring the operations of the Electric Department to Middle Tennessee Electric creates a more efficient operation with the resources needed to address the impending changes in the industry. This will greatly benefit electric customers now and in the future. Moreover, electric ratepayers in Middle Tennessee will enjoy as co-op members a direct voice in their electric utility operations. But it is equally important to recognize that the citizens and businesses in the City will benefit from proceeds generated by the transaction that will help fund infrastructure needs and long-term economic development projects."

"For the sake of our customers and our employees, I couldn't be happier that Murfreesboro Electric is coming together with Middle Tennessee Electric. MTE is a terrific operation; our culture and dedication to customer satisfaction are completely in synch. It will be seamless." Said P.D. Mynatt, General Manager of the Murfreesboro Electric Department.

According to Chris Jones, President/CEO of Middle Tennessee Electric, "This merger has always been about the two great utilities being even better together. Both utilities provide reliable, affordable electricity and deliver great customer service. The rates will not be negatively impacted, the combined utility will be more efficient, costly system duplication will end, and there will be more resources available in outage situations. The Electric Department's building will still be used for the next few years, and any Electric Department employee that wants a job will have a job. This opportunity could not have turned out better for everyone involved." Middle Tennessee Electric will pay $245 million for the Murfreesboro Electric Department, with $43 million paid at closing and $202 million to be paid over 15 years. With interest, the total payment will be $302 million. TVA's review and approval process of the merger is expected to take 60-90 days.