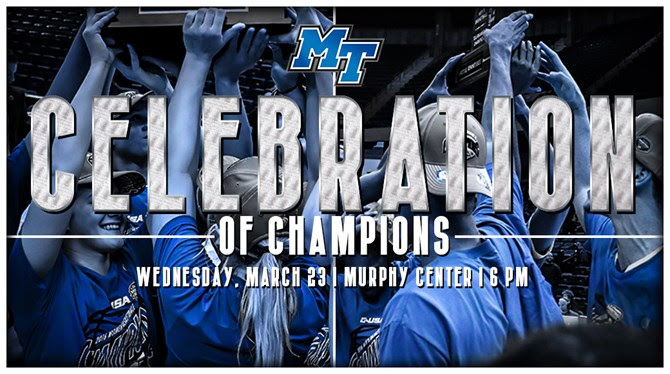 The Middle Tennessee Athletic Department will be hosting "Celebration of Champions" Wednesday night to honor the men's and women's basketball programs. The Voice of the Blue Raiders, Chip Walters, tells NewsRadio WGNS the event will begin at 6 PM on the Murphy Center floor and it will be free and open to the public...

Both team's won conference championships and advanced to the NCAA Tournament to cap off magical seasons. The men finished 25-10 with the last victory coming against No. 2 ranked Michigan State, while the women ended the year 24-9 and made their 18th appearance in the Big Dance.

There will be brief messages from President Sidney McPhee, Director of Athletics Chris Massaro, SGA President Lindsey Pierce, Mayor Ernest Burgess, Mayor Shane McFarland, and both head coaches. Commemorative posters of each team will be available, both teams will be introduced, a senior from each team will address the crowd, and an autograph session will take place at the conclusion of the event.

The Middle Tennessee Ticket Office will be at the event so fans can purchase or renew their basketball season tickets at the same price as 2015-16. The BRAA will be available as they introduce the new Next Level campaign.

Concessions will be open as well so please make plans to come celebrate the accomplishments of our student-athletes on Wednesday.