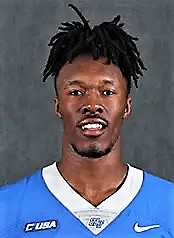 Friends said that they were on a canoe trip, and had stopped for a swim and to cool off. Brandon was in the water when he started to struggle and went under--never to resurface.

Officials say the former Blue Raider was pulled from about 10-feet of water, where they believe he may have become entangled in debris and swept under by the currents.

MTSU Head Football Coach Rick Stockstill Tweeted, "We are saddened to hear about the loss of former Blue Raider Brandon Archer. Our thoughts and prayers are with his family and friends. A great young man and teammate. Gone too soon RIP. U will be missed."

Prior to attending MTSU, Archer played football for Christian Brothers High School in Memphis. Coaches there described the 2015 high school grad as being a "happy spirit who competed hard"