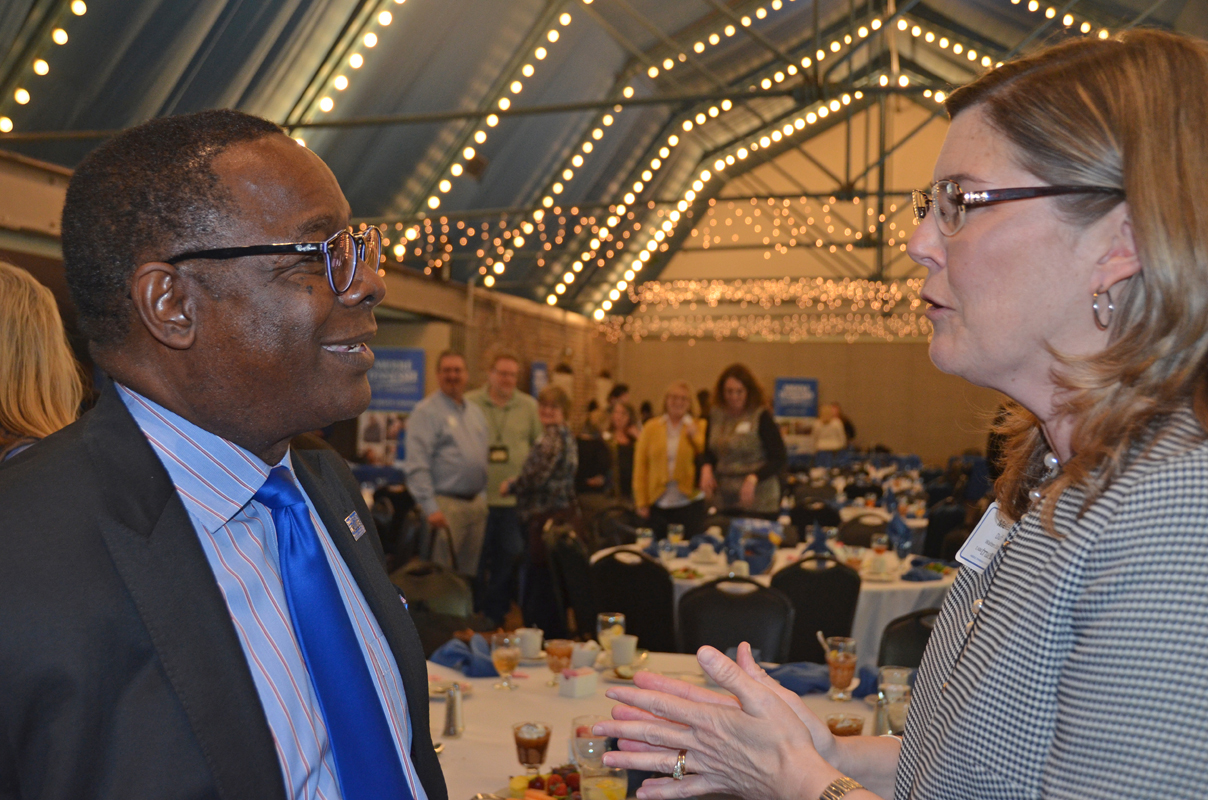 MTSU President Sidney A. McPhee, left, and Melissa Duff, executive director of the Walters State Community College Student Success Center, discuss the dual admissions agreement between the two schools announced Oct. 20 during the MTSU True Blue Tour stop at The Foundry on the Fair Site in Knoxville. The agreement helps ease the transition for students to transfer from Walters State to MTSU. (MTSU photo by Randy Weiler)

The agreement occurred at the The Foundry on the Fair Site, where the fourth leg of MTSU's nine-city True Blue Tour was held later featuring a reception for prospective students and their guests and luncheon for area high school counselors and community college staff.

The agreement helps establish programs to promote successful experiences for students wanting to complete a degree. Walters State students can now interact with MTSU advisers and have access to faculty and programs within their proposed majors. Students completing an associate degree will be granted access to register early for university classes.

"MTSU and Walters State strive for our students to succeed and this partnership provides another element to enable more Tennessee residents to graduate from college, fully supporting the state's objective to produce a more educated workforce," McPhee said. "This agreement allows for an easier transition from Walters State's campuses to our campus in Murfreesboro."

"This agreement offers our students the chance to get on a guaranteed track to earn a bachelor's degree while still at Walters State," said McCamey.

"We are eager to work with MTSU to make the transition process as easy as possible for our students," he added.

A student completing MTSU courses can transfer those credits back to Walters State to help meet requirements for an associate degree. To learn more, students should email transfer@mtsu.edu or visit http://www.mtsu.edu/apply.

Walters State is a TBR community college offering more than 100 associate degrees and technical certificates. It is considered one of the leading tech-savvy colleges in the country and is an Apple Program of Distinction.

The college serves 10 East Tennessee counties with campuses in Morristown, Greeneville and Tazewell. About half of Walters State students plan to transfer to complete a four-year degree. The other half complete associate of applied science degrees or technical certificates to enter the workforce immediately. To learn more about the college, visit http://www.ws.edu.