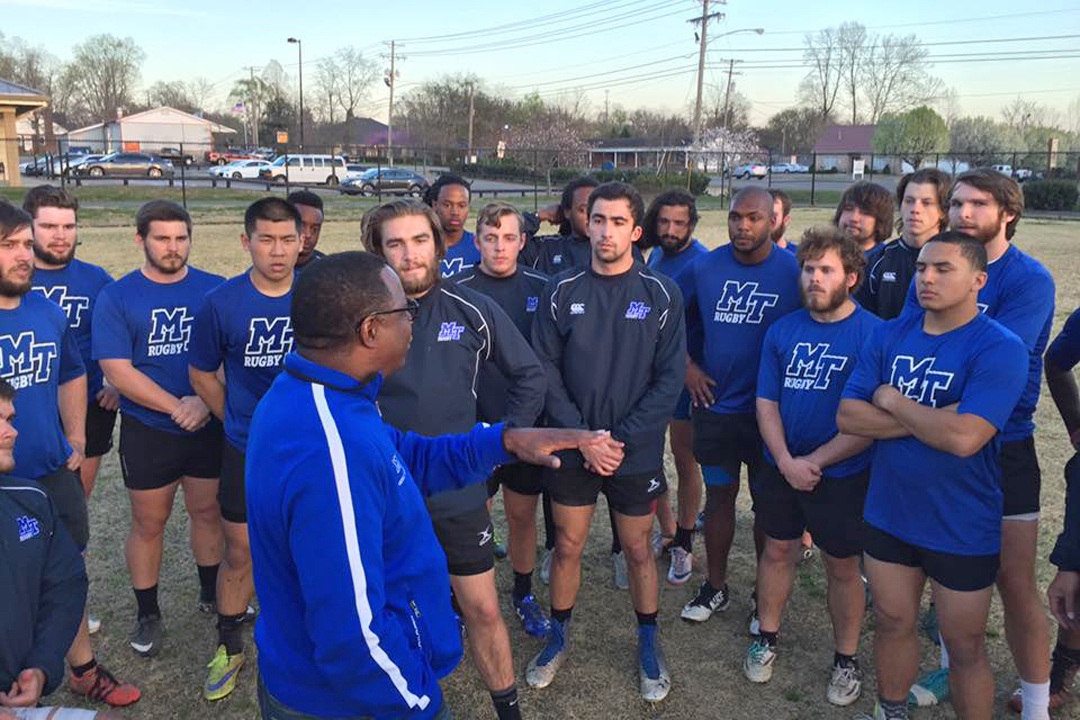 In this March photo, MTSU President Sidney A. McPhee speaks to the rugby team at their practice in preparation for an upcoming Sweet 16 match. The team will compete in the Elite Eight in Ohio on Saturday, April 23, for a spot in the Final Four of the USA Rugby National Championships. (Photo courtesy of MTSU Rugby)

The 2015-16 academic year has been a wonderful time for MTSU athletics, with both the men's and women's basketball teams capturing conference championships and appearances in their respective NCAA tournaments.

Excitement is also bubbling around the football team with the return of offensive coordinator Tony Franklin.

But there is another Blue Raider team that should have campus excited about an impressive run of its own -- the MTSU Rugby Club. The 32-member team has advanced all the way to the Elite Eight in the USA Rugby National Championships, just the second such run in program history and the first since 2000.

The MTSU Rugby Club will play Notre Dame College (Ohio) on Saturday, April 23, in Bowling Green, Ohio, with a victory securing the team a first-ever spot in the Final Four and a chance to compete for the Men's Division 1-AA national title in California.

As head coach, MTSU alumnus and former player Jody Hensley has been instrumental in reshaping the rugby team, racking up numerous South Independent Rugby Conference titles and bids to the national championship tournament.

While men's rugby is not an NCAA-sanctioned sport, it is a fast growing club sport on college campuses nationwide. At MTSU, men's and women's rugby are overseen by Campus Recreation.

Having watched the program's progress over the years, Hensley said this team, the most successful during his tenure, is truly special.

"We're definitely not a big team in comparison when we step out on the field, we're always the little guy. We gameplan around our strengths and let our speed attack the bigger guys and let our endurance take over," said Hensley.

It took years to mold the program into what it is today, but Hensley's main focus centered on shedding the stigma of a "bad rugby reputation" at MTSU.

"A lot of these guys just weren't used to winning. So our main focus was to clear that up, because there are so many good athletes out here," Hensley added. "We have guys out here who have represented their country playing rugby and sometimes people write them off because this is just a club team."

Hensley set out to change that. As the team's success began growing and they were afforded the ability to offer limited scholarships, he was able to begin recruiting and improving the talent pool.

"I love this team," Pentecost said. "In my four years with the program this has been my favorite team to be a part of. I would say the aspect of our team is one of a family."

Pentecost graduated high school in Canada and was drawn back to the states due to the performance of MTSU's rugby team and the campus proximity to his grandparents, who also live in Murfreesboro.

The Elite Eight game against Notre Dame College will be taped and broadcast at a later time. For game and team updates follow the @MTSURugby account on Twitter and the MTSU Rugby Fans page on Facebook for more information.