MTSU seeing increase in high-ability students, McPhee shares with Board of Trustees 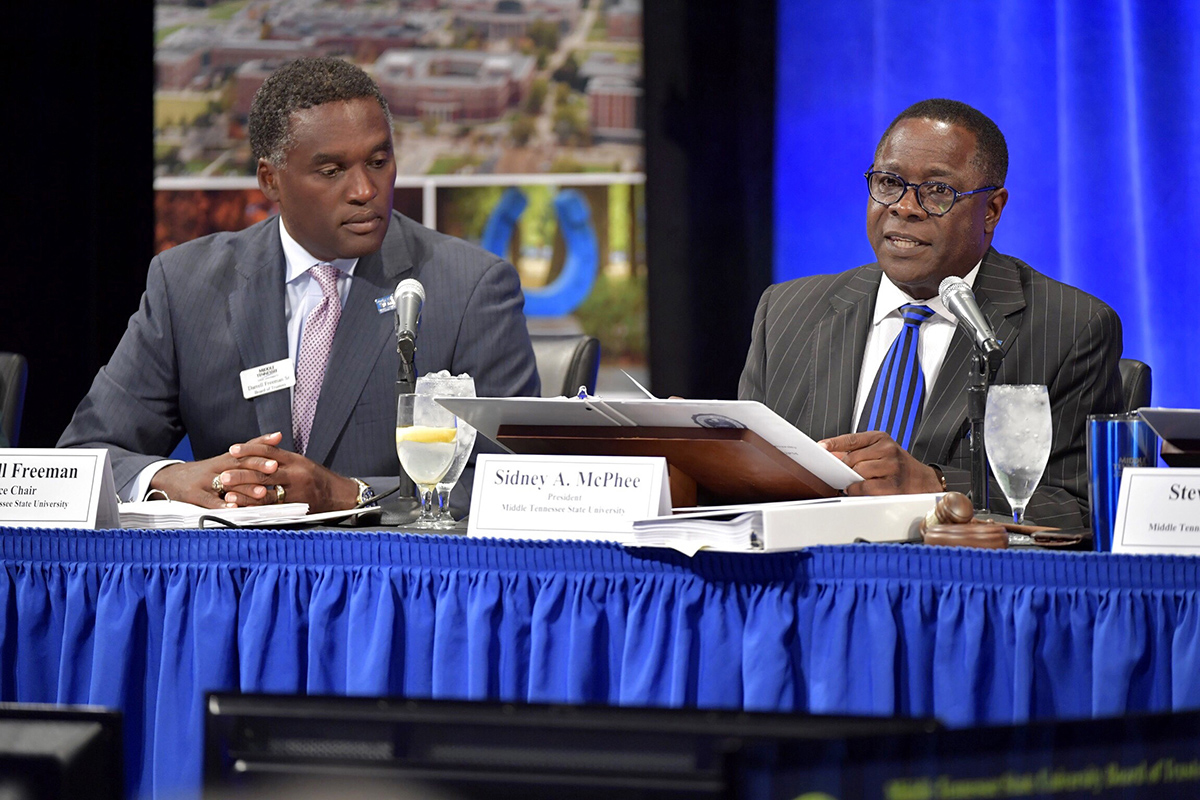 MTSU alumnus Darrell Freeman, left, vice chairman of the MTSU Board of Trustees, listens as university President Sidney A. McPhee gives a campus update during the board's Monday, June 5, meeting inside the Student Union Ballroom. (MTSU photo by Andy Heidt)

Middle Tennessee State University's president told the Board of Trustees Monday (June 5) that the institution remains committed to recruiting high-ability students and is on track for enrollment gains in the fall.

Gains in applications and admissions from out-of-state recruiting, and higher numbers from Williamson and Rutherford counties, as well as East Tennessee, have offset declining or stagnant numbers from Memphis and West Tennessee.

McPhee updated the board on next fall's admissions progress in part to address what he described as a "false narrative" that has circulated on social media as part of community concerns about safety in off-campus apartments.

"Simply put, if we had to choose between quantity and quality, we would rather have fewer, better students who properly reflect the quality and purpose of our university," McPhee said.

He said the growth helps offset "flat, year-over-year numbers from Memphis and negative numbers from the West Tennessee region, where we are seeing a 13 percent decline versus this time last year."

McPhee attributed the push for high-ability students for increases in MTSU's average GPA and ACT scores.

"Our campus growth ... reflects the fact that MTSU is considered a great value in higher education and attractive option for some of the region's best students," McPhee said.

Admissions based upon those applications are also up over last year, he said, with freshman admits showing a 3.8 increase, transfer admits up 3.5 percent and an overall admit increase of 2 percent.

Meanwhile, McPhee said the university is supporting the city's concerted efforts to combat crime that is coming from "individuals who are engaging, in some form or fashion, in the use or sale of illegal narcotics."

In other business, trustees increased tuition and mandatory fees for the 2017-18 academic year by 3.9 percent to cover rising utilities, physical plant and maintenance costs; scholarship obligations; and a state-mandated 3-percent raise for employees.

Tuition and fee increases by the trustees must be certified by the Tennessee Higher Education Commission, which mandated that no increases for the coming academic year should exceed 4 percent.

In other actions, trustees also approved:

• New rates for on-campus housing, including a 2.5 percent increase for campus apartments and 3 percent for residence halls to cover rising utilities, physical plant and maintenance costs.

• A new degree program in Interactive Media, which will begin in Fall 2017 and reside in MTSU's College of Media and Entertainment.

• Approved a recommendation to extend tenure to 30 faculty and promote 34 other faculty.