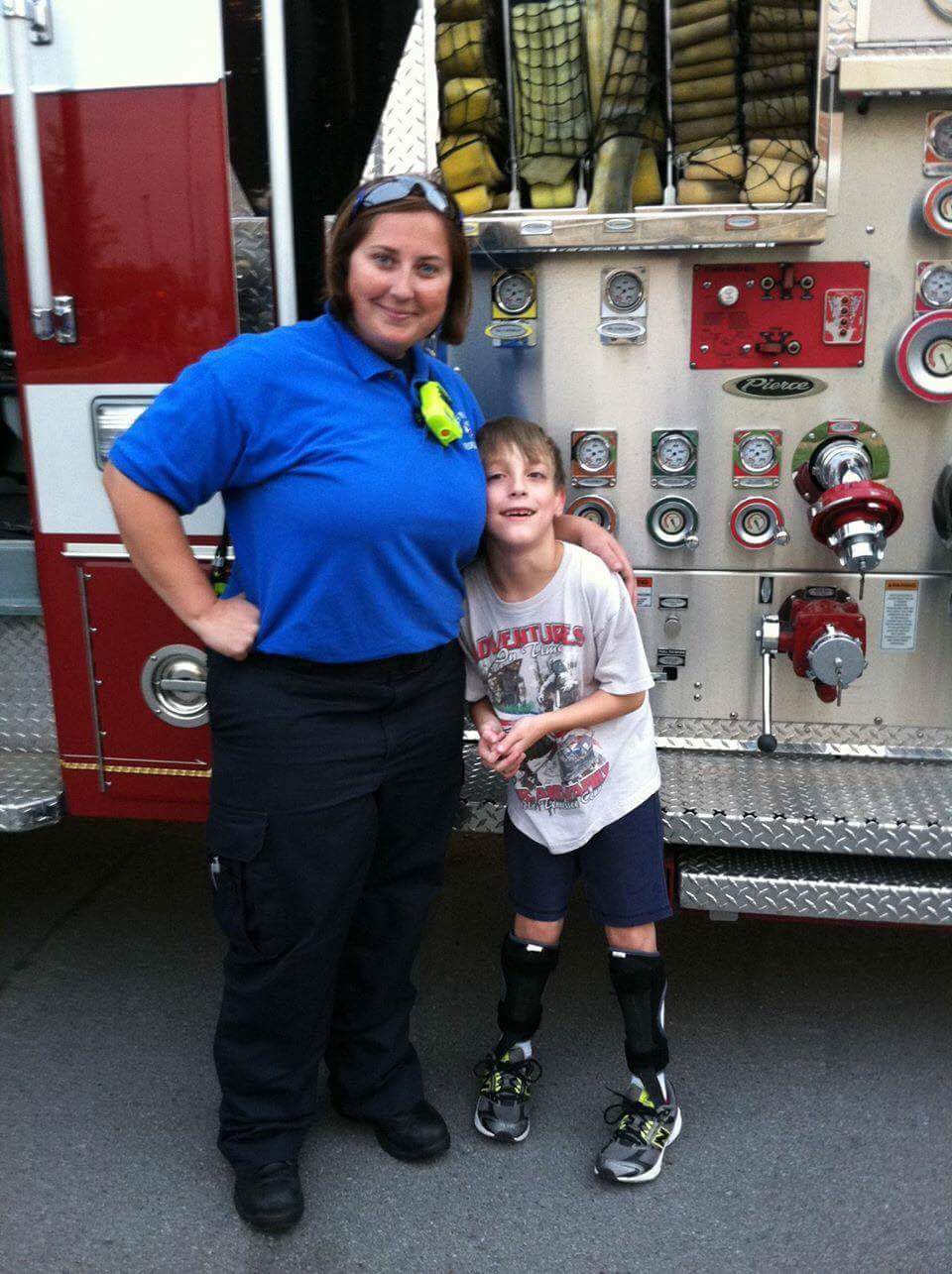 Murfreesboro Firefighters are gearing up for the Special Kids Race to be held on Saturday, March 19, but they aren't just running for their health...

They will be running in honor of 11-year-old Ivan Mrzena, who has become a good friend of the C-Shift crew at Murfreesboro Fire & Rescue Department's Station 9 located on Cason Lane. Crew members include Captain/Shift Inspector Mark McCluskey, Drivers Josh Oliver and Scott Duncan, and Firefighters James Bryant, Mitchell Whittenburg, and Shandreah Womack. Ivan is particularly fond of Firefighter Shandreah Womack and refers to her as "Firefighter Shan."

The crew first met Ivan in 2012, when they were displaying equipment for community relations at a car show. "He really enjoyed seeing the fire truck," said Firefighter Womack. "I will never forget the smile he had on his face."

Then in December 2015, while the crew was conducting a fire inspection at Scales Elementary School, Ivan's mom, Pamela Mrzena, recognized Shandreah and called out, "Firefighter Shan!!!" She then introduced herself as "Ivan's mom," and began to tell Womack that Ivan talked nonstop about "Firefighter Shan" and his desire to work at Station 9 someday.

After the New Year, Ivan brought goodies to the station so he could see the crew again. "I was so excited to see him after all those years," said Womack. "He still had the same awesome smile!" Womack knew that seeing the fire truck was his favorite, so she offered to take him out to the engine room to take a look, but Pamela explained that she had to be at a Special Kids meeting and could not stay.

"This got me to thinking about the upcoming Special Kids Race," said Womack. " I knew some of our personnel were already going to be running it, but thought it would be neat if we could do it in honor of our buddy Ivan!"

Womack received approval from MFRD's Fire Rescue Chief Mark Foulks who thought it was a fantastic idea. "This young man has obviously become a part of the Station 9 family and is therefore a part of MFRD's family. We are honored to participate in the race for him," commented Foulks.

Ivan was born 17 weeks early. "Shortly after we found out that I was pregnant, I learned I had fibroid cysts," said Pamela. "Ivan was always competing for room while I was carrying him and he eventually lost."

He weighed one pound/five ounces and measured 11 ¼ inches the day he was born and spent a total of four and a half months in the Neonatal Intensive Care Unit (NICU).

"He was first given a three percent chance of surviving," she continued. Learning that statistically speaking, white male babies have the lowest survival rate for preemies, the family was worried. Ivan was diagnosed with cerebral palsy at just three years old, but began therapy around nine months old. Though cerebral palsy is his primary diagnosis, he also has strabismus and hydrocephalus and has had 11 surgeries to date.

"Besides physical therapy, Ivan also receives occupational and speech therapies at Special Kids," said Pamela, "and he doesn't let his physical challenges get him down by any means!" Ivan is very sociable and is active with his Cub Scout pack. He will soon be making the transition to a "Boy Scout."

"He has big plans to become a Firefighter at Station 9 one day," said Pamela. As for now, he'll just be happy to participate in the "1 Mile Fun Run" at the Special Kids race with his buddies from Station 9 and "Firefighter Shan!"

For more information about the Special Kids Race, visit specialkidsrace.org.