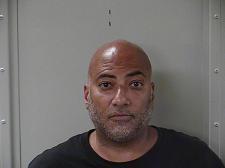 A 47 year old man crossing Old Fort Parkway caught the watchful eye of Murfreesboro Police on Monday afternoon. The subject, who was wearing all black, had a pink backpack with him. Evidently, when police pulled up to the man, he quickly dropped the backpack stating that he had a BB Gun inside of it.

Officers then questioned Kyle Miranda and asked if they could retrieve the BB Gun from the backpack, which he said okay to. As the officer opened the pack, it was noted that a strong smell of marijuana was present.

Along with the gun, police found several individual baggies of weed. Miranda claimed the marijuana was for him and that he just bought it.

The green leafy plants were confiscated along with the BB Gun. Miranda was arrested and charged with possession of a schedule six drug with intent. He was booked under a $4,500 bond in the local jail on the New Salem Highway.