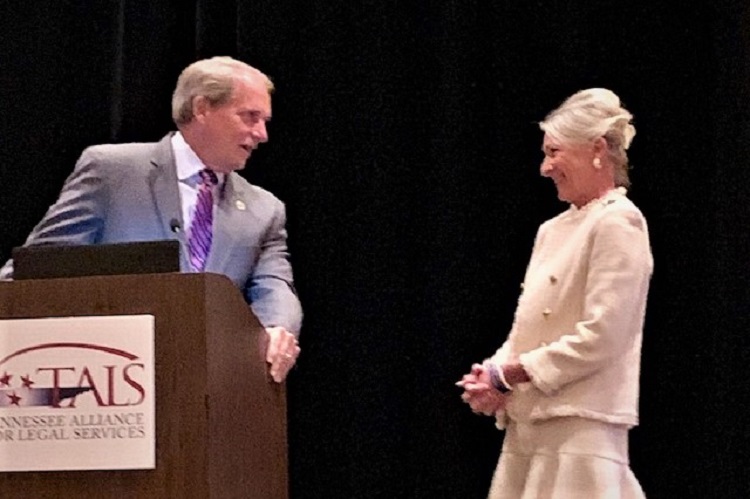 (MURFREESBORO) A woman who grew-up in Murfreesboro was presented the 2019 Janice M. Holder Access to Justice Award for her strategic leadership to ensure the legal system is open and available to all. Administrative Office of the Courts Director Deborah Taylor Tate was honored at The Tennessee Alliance for Legal Services that continues through Friday at the Embassy Suites here in Murfreesboro.

Tate received the prestigious recognition for her strategic leadership to ensure the legal system is open and available to all.

The award was created in honor of Janice Holder, the first female Chief Justice of the Tennessee Supreme Court, who spearheaded the creation of Tennessee's Access to Justice Commission during her tenure as Chief Justice.

Recognizing that the court system impacts the lives of all Tennesseans, Director Tate drives innovative solutions to make the civil justice system more accessible, especially to the most vulnerable people in our state. Her ability to see the big picture and potential connections between the access to justice community, other state agencies, national groups and funders is a tremendous asset to the state. A shining example of this is her leadership in identifying and developing court related resources to address the opioid epidemic in Tennessee and nationally.

Legal Services Corporation (LSC) President James J. Sandman said, "She has provided indispensable leadership and guidance to the LSC task force and has fostered close collaboration between the National Judicial Opioid Task Force and LSC Opioid Task Force. Director Tate's leadership resulted in the LSC selecting Tennessee as one of four locations around the country to hold a program to publicize the release of the LSC Opioid Task Force Report."

Rutherford County Mayor Bill Ketron was a part of the presentation where he shared stories of when he and Tate both attended Mitchel Neilson Elementary and Central High School.

In addition to her leadership with the State Supreme Court, Tate has also served as chairman and director of the Tennessee Regulatory Authority, and as a commissioner with the Federal Communications Commission from November 9, 2005 to December 30, 2008. Her successes also include being co-chair of the National Judicial Opioid Task Force and on the board of the Three Branch Institute Advisory Committee. In addition, Tate is an elder with Westminster Presbyterian Church in Nashville.