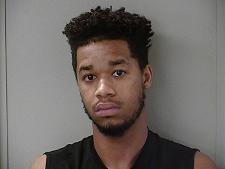 A man wanted by police on felony child abuse charges has been apprehended in Murfreesboro. Officers say when they arrived at the apartment to locate Tamontez Grandberry, he was found hiding in a closet.

The 19 year old was accused of pushing a woman into a wall and then choking her, according to a Domestic Violence report filed earlier this month. The report showed, "Tamontex [Grandberry] shoved her into a wall and then put his hands around her neck restricting her breathing and banged her head onto the bedroom wall approximately 4 - 5 times." The victim told police that Grandberry stated, "You better be lucky I haven't broke your neck or beat you to sleep." By the time police got to the scene, Grandberry was already gone.

In July of this year, the same man was accused of child abuse. According to an incident report, Grandberry was said to have been babysitting his girlfriends 10-month old child. When the mother woke the baby the following morning, she noticed several bruises and contusions on the child's abdomen and forehead. The child was taken to the hospital.

DCS got involved and put together a safety plan for the mother and her 10-month-old baby. The plan did not allow for Grandberry to be around the child. However, Grandberry allegedly violated that so-called safety plan within a matter of days, according to an investigation by Detective Tommy Roberts. During that violation of plan is when the suspect reportedly assaulted the mother of the child.

Evidence from the child abuse case was presented to the Rutherford County Grand Jury on August 7, 2018 which resulted in Grandberry being indicted for three charges of felony child abuse.

When police went to arrest the 19 year old on the felony charges, they found him hiding in a closet. He was transported to the local jail where he remains, as of August 20, 2018.

Grandberry will face the felony child abuse charges in court on September 10, 2018