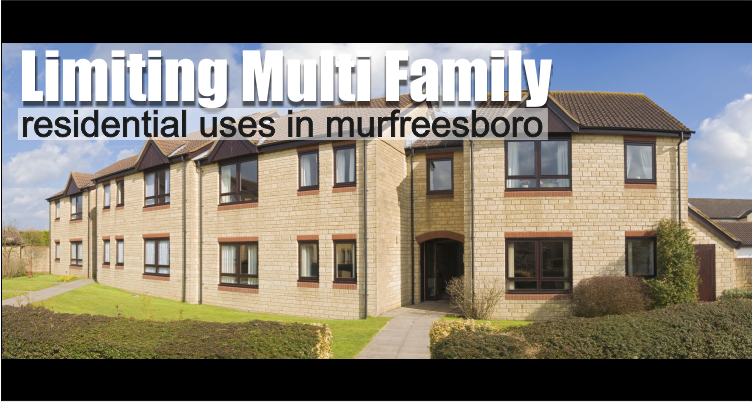 Planned development zoning, such as PUD and PRD, allows the Planning Commission and City Council to exercise a higher level of scrutiny over the layout, design, and impact of a proposed development during the zoning and entitlement phase.

Some of the recent multi-family developments constructed in Murfreesboro include Vintage at the Avenue (203 units), Henley Station (600 units), Everwood at The Avenue (336 units), 3342 Memorial (241 units).

According to data from the Murfreesboro 2035 Comprehensive Plan, 44.8 percent of the population rents in Murfreesboro.

The Murfreesboro City Council voted August 11, 2016, to impose a moratorium in approving any rezoning that creates higher density of RM-12 and RM-16 in an area of the city, to allow time for impact studies to determine where such zoning would be acceptable. The motion made by Councilor Rick LaLance did not apply to PRD or any RM-12 and RM-16 plans already in process.

At the time, Councilor LaLance suggested that the City needed "a chance to look at the impact these developments have on our infrastructure."