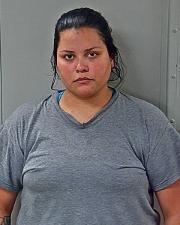 A 29-year-old Murfreesboro woman was arrested and charged with DUI and Leaving the Scene of an Accident. The wreck occurred on South East Broad Street at South Church Street.

Shortly after the crash was reported, police spotted the suspect vehicle on South Church Street at National Drive. While following her officers learned through dispatch that previous to an accident with another vehicle, the same woman allegedly collided with a street sign on Middle Tennessee Boulevard.

Once stopped and questioned, authorities report that Jennifer Longoria had slurred speech, was unsteady on her feet and had an odor of alcohol. She further admitted to drinking at a bar prior to driving and had no recollection of crashing her car "multiple times," according to a police report.

Insider her vehicle officers found a half empty bottle of Vodka, that police say she admitted to consuming earlier in the day.

After being transported to Saint Thomas Rutherford Hospital and cleared, she was arrested for leaving the scene of an accident, violation of the open container law and DUI.