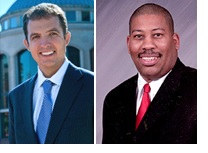 As WGNS has done for the past 67-years, you have the opportunity not only to learn how candidates for local public office feel--but you get to talk with them. The two persons seeking your vote to become the next Mayor of Murfreesboro will be on the Action Line from 8:10 to 9:00AM this coming Monday morning (3/3/2014).

Hear from Shane McFarland (left photo) and Ron Washington (right photo), listed alphabetically. This will be a casual conversation on their ideas of making the Heart of Tennessee even better.

In addition to hearing the "live" this Monday morning on all WGNS' channels (AM 1450, FM 100.5 and FM 101.9), you will also be able to listen to the broadcast at your convenience. It will be recorded in PODCAST form and saved under the Action Line Radio broadcast. You can listen at your convenience. If you have friends in distant places, the "live" program will be available as a worldwide stream on WGNS' website: www.WGNSradio.com.

In addition, WGNS has invited all candidates for Murfreesboro City Council to tell about themselves on the Action Line on Tuesday morning, march 11th (8:10-9:30AM). The program is a half-hour longer that morning so that we will have an unhurried opportunity to get to know the candidates. The top three (3) vote recipients will be chosen. Candidates include Axl David, Madelyn Scales Harris, Candy Roberts Joyce, Rick LaLance, Brian Patterson, Jeff Rainwater, Stephen A. Shirley, and Doug Young.

The candidates for City School Board have been invited for Friday, March 21st, also 8:10 to 9:30AM. The top three (3) in this race are also the ones taking office. They include: Wesley Ballard, Kevin N. Fisher, Geoffrey Robert Burns Herring, Phil King, Novonda Lilly, Nancy Rainier, and Collier Smith.