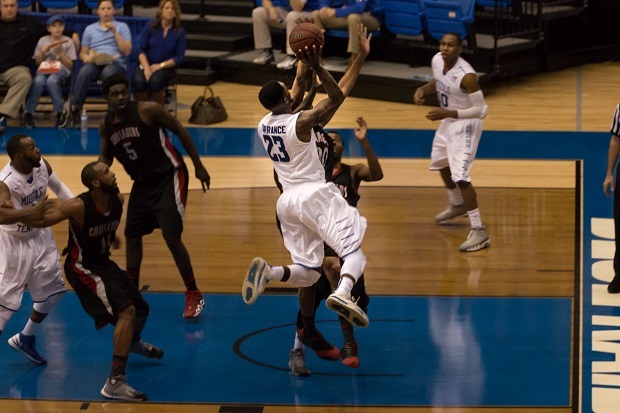 Photo by Scott Walker during a past MTSU basketball game.

Chad Griffin, President of the Human Rights Campaign (HRC), the nation's largest lesbian, gay, bisexual, and transgender (LGBT) civil rights organization, issued the following statement in response to the announcement that the NCAA will not host any future events - from Final Four championships to education conferences - in cities without LGBT inclusive non-discrimination laws.

"The NCAA has sent a very clear message that unfair and unjust discrimination against LGBT people will not be tolerated by the association, and we hope lawmakers are listening," said HRC President Chad Griffin. "In order for cities to even qualify to host these major sporting events, they must now have commonsense, LGBT-inclusive non-discrimination protections. We commend the NCAA Board of Governors for taking this critically important stand in favor of fairness and equality."

"The higher education community is a diverse mix of people from different racial, ethnic, religious and sexual orientation backgrounds," said Kirk Schulz, president of Kansas State University and chair of the Board of Governors. "So it is important that we assure that community - including our student-athletes and fans - will always enjoy the experience of competing and watching at NCAA championships without concerns of discrimination."

As a member of Conference USA, MTSU competes at the NCAA's highest level in 17 sports. What this recent announcement means for MTSU is unclear at this time.

In the announcement, the NCAA made clear that, "The Association considers the promotion of inclusiveness in race, religion, sexual orientation and gender identity as a vital element to protecting the well-being of student-athletes, promoting diversity in hiring practices and creating a culture of fairness."

This announcement could have major implications for the state of North Carolina, which according to the News & Observer has hosted NCAA events 17 times in the past two decades. North Carolina Gov. McCrory and state lawmakers have been coming under increasingly intense pressure to repeal a radical and discriminatory law - HB 2 - passed in a hurried, single-day session. HB 2 eliminated existing municipal non-discrimination protections for LGBT people and prevents such protections from being passed by North Carolina cities in the future. The legislation also forces transgender students in public schools to use restrooms and other facilities inconsistent with their gender identity and also compels the same type of discrimination against transgender people to take place in publicly-owned buildings.