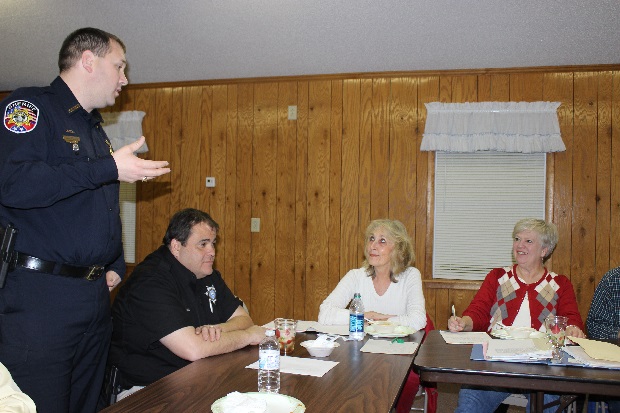 Retirees John and Colleen Dwyer didn't know many people when they moved to Rutherford County eight years ago. But they quickly became part of their community when they joined the Big Springs Community Neighborhood Watch. John Dwyer said Neighborhood Watch gives them a chance to meet their neighbors. Colleen Dwyer said they’ve found camaraderie, community involvement and a sense of security. “The more you know your neighbors, the safer your neighborhood is,” Mrs. Dwyer said. “We have a phone tree and do emails when there’s a problem.”

Past treasurer Mary Elaine Hargis said the group formed in 1996-97, but folded when they couldn’t get a president about two years later. The group reorganized in June 2000 when Larry and Nancy Carter offered the New Hope Baptist Church as a meeting place. They meet the second Thursday every other month with a covered dish dinner. “You find interest in the security of your property like interests in the security of their property,” Hargis said.

Helen Blackburn White asked where the jail was located. Sheriff Arnold complimented her, saying, “That’s good if you don’t know where the jail is.” Some residents asked for more patrol cars to drive through the community. Sheriff Arnold said both marked and unmarked patrol vehicles are patrolling through the county to keep residents safe and prevent burglaries and theft.

Sgt. Cassidy informed the community they could view Raids online to get information about crime in the community. Also, residents can register on the Sheriff’s Office’s Offender Watch at http://www.sheriffalerts.com/cap_main.php?office=55531 to identify registered sex offenders and where they live. In this way, parents and neighbors will know if a sex offender lives in there are and get alerts when sex offenders move into a community.

Detective Richard Brinkley, whose zone includes the Big Springs Community, discussed an increase of home burglaries between the hours of 9 a.m. and 2 p.m. when people are working and not at home. Burglars are stealing jewelry, electronics and guns, the detective said.

“They’re going for the gold because it’s so easy to get rid of,” Detective Brinkley said, explaining burglars can sell the gold and earn thousands of dollars per day.

Citizens who see people acting suspiciously should call the Sheriff’s Office immediately at 898-7770 so a patrol deputy can check out the situation. “If you get a tag number, that’s even better,” Detective Brinkley said. “Setting up the camera to get a tag number is good.” He asked residents to try to get the license plate number for a new, full-sized, red Chevrolet pickup truck used to steal a camper and call the Sheriff’s Office immediately. Another suspect with a Mohawk driving a red/maroon and silver Chevrolet S-10 pickup truck is stealing cattle panels for scrap metal. Also, someone stole several NASCAR jackets from Love’s Truck Stop.

Citizens who are burglary victims are asked not to touch anything because they might destroy evidence. Call the Sheriff’s Office. J.D. “Dave” Hayes said he enjoys the Neighborhood Watch meetings. “It’s just great to know your neighbors,” Hayes said.

For more information about Neighborhood Watch, call Deputy Noe at 904-3018.