"Next To Normal" Opens Feb. 2nd At MTSU 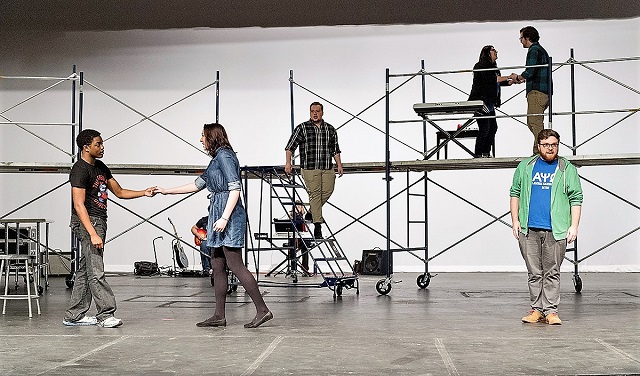 Sharing the story of a family struggling with mental illness has been much more than a "Next to Normal" challenge for the MTSU Department of Theatre and Dance cast of the Tony Award- and Pulitzer Prize-winning rock musical.
Advance tickets are $10 general admission and $5 for senior citizens 55 and older and are available at http://www.mtsuarts.com. Show times are 7 p.m. Thursday-Saturday, Feb. 2-4, in MTSU's Tucker Theatre.
The six-member cast, guided by director Skylar Grieco of Knoxville, Tennessee, has been grappling for weeks with portraying the emotions required of the acclaimed 2009 Broadway show, not to mention the vocal pyrotechnics.
"It's hard at the end of a four-hour rehearsal where you're just going back and repeating emotionally charged scenes over and over again to try and get them right, changing small things to get them to the right place," Grieco, a senior theatre major, explained. "It's exhausting both emotionally and physically. And I'm not even the one up here doing the scenes!"
"Next to Normal" looks in on Diana, a suburban mom, and her family as she wrestles with bipolar disorder. Her husband, Dan, and children, Natalie and Gabe, join her doctors in trying to help Diana, and the story follows the family's trials with grief, drug abuse, suicide, psychiatric ethics and methods, and fitting into the neighborhood.
The MTSU troupe chose the play because of its originality, its music and its unflinching look at mental illness. The "Next to Normal" program, available at http://ow.ly/Knpx308qdTy, not only lists the entire cast and crew but explains their personal involvement in its focus. You can also see a video preview of the production at http://youtu.be/v7ZnEyTNMZI.
MTSU Theatre recommends parental guidance for those under 18 because of the serious subject matter and language.
Dallas Boudreaux, a Knoxville junior portraying Natalie, called "Next to Normal" the "most emotionally exhausting show I have ever been in." Along with her director's rehearsal regimen of stretching, breathing, laughing and plenty of breaks, she said she's relying on Netflix comedies to restore her equilibrium off-stage.
Regan Holmberg, a Nashville resident by way of Pensacola, Florida, and freshman computer science major making her MTSU Theatre debut as Diana, also admitted that "everything about this show is incredibly difficult."
"I was never really a singer and I got cast and had to become one quickly," she said. "It's a new experience for me for which I'm very, very grateful. And emotionally, this show ... it's a powerful story of the effect of mental illness on a family as whole. I think it's safe to say that it hits very close to every single one of us, especially with mental illness."
"All the emotion happens whenever I'm not on stage," adds Memphis sophomore Donovan Hughes, who portrays the daughter's potential boyfriend, Henry, "so a lot of times I'll just sit back there and I'll listen to the songs and then I'll just start to tear up.
"I'm like, 'I'm not part of this. This is not happening to Henry.' I'm just listening to it like somebody would be watching the show listening to it and having the same emotions, and it never stops."
Junior Gerald Oliver of Smyrna, Tennessee, a biochemistry major who switched to theatre, is portraying the dual role of Diana's doctors, Fine and Madden. He joked that where he expected "huge dance numbers and choreography," unlike most musical productions, "Next to Normal" will intrigue the audience as well as the cast.
"You're laughing and thinking, 'Oh the audience is going to love this, they're gonna applaud! They're going to go crazy!' Throughout this entire process, this one is 'Oh, you're going to cry here.'"
Aaron Johnson, the Kingsport, Tennessee, sophomore playing son Gabe, said audiences for this production definitely will find it worthwhile.
"It's a show that no matter who you are, you can find some way to relate to this and have it have an impact on you in a strong way," he said, "whether it's from the least severe moments in the play or the most musical. Everyone can find themselves in this story in some way, and that, to me, is amazing."
Knoxville senior Paul Gary said he tried to stretch his acting training by using different personal experiences to relate to his role as the middle-aged father.
"I think the theater has a way of telling the right story at the right time," he said, "and this piece is nuanced enough that every audience member will have a moment of personal recognition unmatched by most theater experiences.
"Come with an open mind and an open heart, and we can provide a light in the darkness."
Tickets also will be available at the Tucker Theatre box office one hour before curtain times. For more information about the show, visit http://www.mtsuarts.com.
Read more from:
News
Tags:
"Next To Normal", MTSU, Tucker Theatre, WGNS
Share: