Oakland Sweeps Smyrna, plus all local scores from Friday

A foul fest at Oakland's Randy King Gymnasium, but the home standing Pats swept visiting Smyrna. The Oakland girls held on to beat Smyrna 70-66 Friday night in District 7-AAA play. The Lady Patriots built a 15-point half time lead, but they saw that disappear by the fourth quarter. The Lady Patriots hit enough free throws down the stretch to improve to 4-and-1 in the district going into Saturday night's game at Riverdale. Sophomore Ansley Eubank led Oakland with 20 points. Kaitlin Oliver added 17 and Emily Eubank 14. Smyrna's Brianne Alexander led the way for the Lady Dawgs with 20. Freshman post Tyra Hughes chipped in 19. There were 52 fouls in the girls game.

The Oakland boys used a strong inside presence with Kyle Oliver and Ricky Dunnaway to pull away from Smyrna 65-52. Oliver finished the game with 19 points and Dunnaway had 11 and several rebounds. He also connected on two three-pointers in the first half. The Bulldogs, led by Taylor Vanderbilt's 20 points, mounted an early second half comeback. However, Oakland withstood the storm with key baskets and free throws. The boys game was also foul laden, with 39 called in the game.

While Smyrna doesn't have a district game, the Oakland squads will travel to Riverdale for a first-ever Saturday night version of the "Battle of the 'Boro." Tipoff for the girls game is 6pm, with the boys game to follow. WGNS will have coverage right after the Lady Raider game. Riverdale girls will also induct several players, coaches and contributors into their Hall of Fame during the evening. 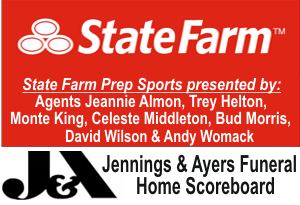