One ticket, three games? Get yours for Blue Pride Saturday 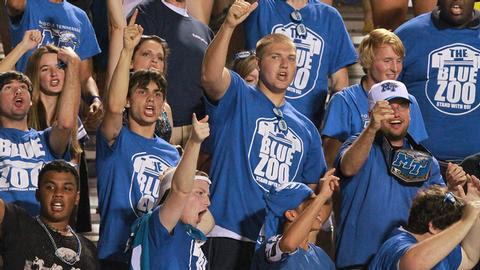 Show your Blue Raider pride on Saturday, March 1, with a great deal to see three MTSU athletic contests for the price of one.

For the purchase of a $10 ticket to any one of the games, fans will get in free to the other two games on campus.

The special day is part of the True Blue Community Initiative, a grass-roots effort started last fall to deepen support for MTSU academics and athletics across all segments of the community. The effort is being spearheaded by the Rev. James McCarroll, pastor of First Baptist Church on East Castle Street in Murfreesboro.

"We have one of the greatest gems that any city could ask for in MTSU," McCarroll said. "Our goal is to encourage our community to get better connected ... to be a part of the culture of MTSU and welcome that culture into their homes, so that their sons and their daughters know the value of having this university in this place."

Blue Pride Saturday was launched as a way to encourage local families who may be unfamiliar with MTSU to visit campus and enjoy quality time together in an economical way, McCarroll said.

"We deeply appreciate Pastor McCarroll's enthusiasm and willingness to step forward and inspire others in our communities to support our university," said MTSU President Sidney A. McPhee. "Blue Pride Saturday is a great value and great opportunity for our fans."

March 1 is also Senior Day for the Blue Raider men's and women's basketball programs. Director of Athletics Chris Massaro notes that all seniors in both programs are either on track to graduate or have already met the qualifications to do so.