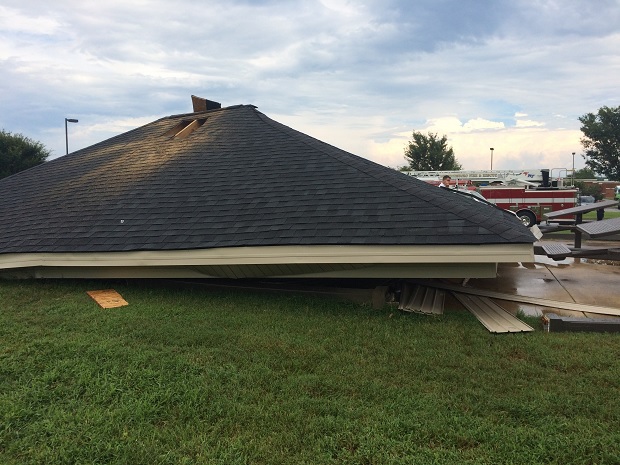 Firefighters cut through the fallen structures roof and used airbags to raise the roof to check for victims. Since the school year has not yet begun, there were no children present at the school and there were no injuries.

The large pavilion, located on the school grounds at 745 DeJarnette Lane, fell during a time that Chad Gehrke , Airport Manager of nearby Murfreesboro Airport, saw winds in excess of 60 mph and homes around the school report tree limbs down.

Murfreesboro Codes and Engineering is working with schools maintenance Director Larry Willeford to secure a plan to remove the damaged structure before school begins for a half day on Friday. Assistant City Engineer Sam Huddleston states "The cause of the collapse looks like strong straight line winds which caused some uplift, and an anchor bolt in the concrete slab failed, causing the collapse!"

The pavilion was permitted and constructed in 2015. City schools maintenance crews secured the area and Murfreesboro Police will conduct a special watch overnight.