Raiders arrive in the Bahamas 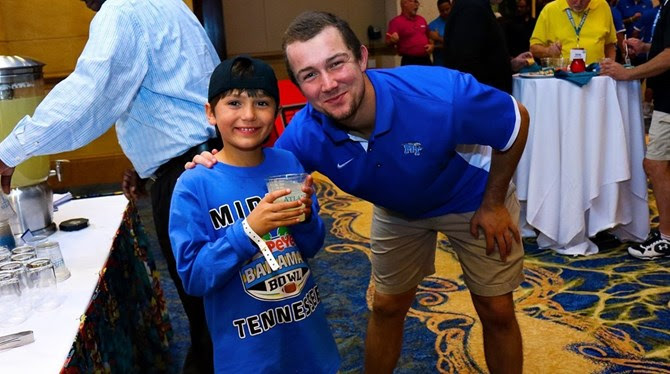 The Blue Raider football program got an early start to the day with a 9 AM flight to Nassau and made it to the hotel around 2 PM Eastern time. The team was welcomed Sunday by 80 degree temperatures and an incredible backdrop on Paradise Island as it arrived for the 2015 Popeyes Bahamas Bowl.

"The team is very excited about our opportunity and to finally reach the island," said head coach Rick Stockstill. "This is a chance of a lifetime destination and no one is more deserving than this group of players. We look forward to a great week and the experience that lies ahead."

The Blue Raiders spent the majority of their afternoon acclimating themselves to the enormous resort that is Atlantis. Along with a team meeting, then a second meeting to go over hotel logistics, the players learned where meeting rooms, locker rooms, player's lounges, and of course, food and water slides were located. In the evening, both teams and travel parties took part in the Welcome Reception on the Royal Deck, surrounding by luxurious pools and beaches.

The trip may be one of the top destinations among all the bowl games but the importance has not been lost on the team as it searches for its second FBS bowl victory.

"We are all excited about being in the Bahamas, having a good time and focusing on the game," said safety Kevin Byard. "Obviously, there are a lot of distractions here and we will have fun but at the same time we know we are here to play a football game. Our focus will be on the challenge ahead of us."

Middle Tennessee will hit the practice field for the first time on Monday morning, which will be like a Wednesday practice of a normal game week. It all leads up to a Christmas Eve kickoff at 11 a.m. Pregame coverage on NewsRadio WGNS begins at 9am with kickoff at 11am Murfreesboro time.