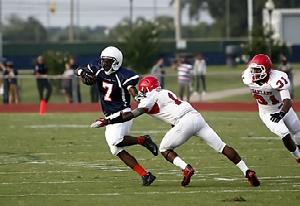 The dress rehearsal is over and now it's time for area prep football teams to begin game week preparations. What the TSSAA calls Week Zero is upon us, with most Rutherford County teams preparing to play each other this week. In District 7-AAA, Smyrna will host La Vergne on Thursday night at 7pm. It's the first game of the regular season and the Wolverines are looking for just their second win in school history over the Bulldogs. Their last win was back in 1999. WGNS will have the game this Thursday, beginning at 6:30pm.

Friday night's slate has Riverdale at Siegel, Ravenwood at Stewarts Creek, Mt. Pleasant at Eagleville and Middle Tennessee Christian at Cannon County. Bryan Barrett, Jon Dinkins and Donnie Johnson will have the live play-by-play from Siegel in the battle between the Warriors and Stars. Riverdale, after a slow start to the season last year, defeated both Siegel and Smyrna to end the year, which saw them not make the playoffs. During the game coverage, Monte Hale, Jr. will travel to Eagleville and bring in-game reports from Talon Field. Barrett says it's a way the station is looking to expand coverage to as many teams as possible each week. Hale will report from different games throughout the season during the live broadcast from another game.

This year's prep season will also see a Sunday game for the first time ever. Oakland will travel to Blackman in a Week Zero matchup between two of the pre-season's favorites to get to the Blue Cross Bowl. The game will not only be on WGNS but broadcast on ESPN as well. Our coverage will begin in progress at noon with a replay of the entire game following.

You can keep up with the latest sports on WGNSRadio.com. Just click on sports in the navigation bar to get news about prep and MTSU sports.