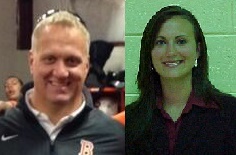 Wendi Scott has been named girls' basketball coach of the Riverdale Lady Warriors. Scott, a former head coach at Lawrence County also spent time as an assistant at Riverdale under Coach Michael Burt in the early 2000's. She replaces Cory Barrett, who resigned after his team was removed from the postseason and he was suspended for a year for throwing a tournament game.

By the way, Smyrna girls basketball has posted a vacant position for a girls basketball head coach. However, Principal Rick Powell told NewsRadio WGNS by email that no decision has been made about Coach Shawn Middleton, whose team was involved in the incident with Riverdale. Powell told us they're "exploring possibilities."

David Watson has been tabbed the next head coach for Blackman football. He replaced Philip Shadowens, who resigned in February. He was an assistant coach at Blackman before leaving to become the first head coach for Siegel football. In 2009, he returned to Blackman and has coached there since. He was defensive coordinator last season and was most recently named interim head coach while school officials conducted a search for a new head coach.