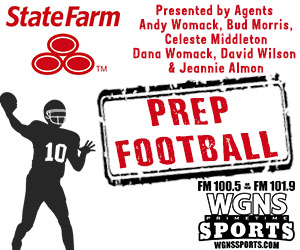 A battle of running backs in Region 3-6A as Riverdale hosted Siegel on a wet Tom Nolan Field. The Warriors defeat their cross town rival by an 18-6 final, with heavy rainfall for much of the game.

Riverdale senior Savion Davis, behind their big offensive line, rumbled for 186 yards on 27-carries and scored two touchdowns. This one with 7:41 left in the third would be the final score of the night...

The Star's senior Leland Wilhoite had 159-yards on 26-carries and scored their only touchdown of the game with 25-seconds left in the first half...

The Warriors, now 3-0, will host Spring Hill next Friday night. The Stars, who drop to 1-2, will host Antioch.

Siegel RB Leland Wilhoite had 159-yards on 26-carries and a touchdown.