Ruby's Choice is the debut novel by Murfreesboro resident D.F. Jones and book one of the Ditch Lane Diaries 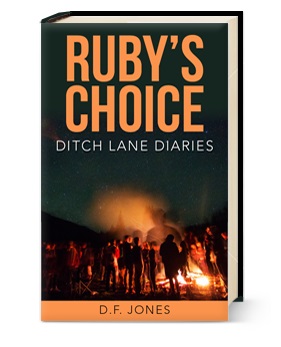 Ruby's Choice is a coming of age story set in the late 1970's in Middle Tennessee with a splash of paranormal which will blossom in the second and third books of the series. All the main characters in the story are MTSU students. MTSU students and Alumni as well as natives will be familiar with most of the settings.

Sandy's Story, third book in the Ditch Lane Diaries is estimated to be release Summer 2016.

Halloween shorts: D.F. Jones is developing a short title "The Cabin's Antique Mirror", romance paranormal release to be E-Book only by third week of September 2015.

Stuck in the Middle with Two

Ever since Ruby discovered an amber-encased spider web in the Campbell Ridge Cave, she has had dreams of births, deaths and glimpses into the future. Ruby's dreams have foretold the daughter of her high school friend, Cathy, the death of her beloved Aunt Sammie, and the coming of a new love in her life.

Ruby's shift is coming to a close at Everglade General Store. As she stacks the last row of bath soap, Ruby recalls the delicious dream she had the night before. In the dream, a gorgeous guy is kissing a tickle spot, just behind her left earlobe, sending shivers up her spine. If only that dream could come true, instead of the one where a state trooper gives her a seventy-five dollar speeding ticket!

Ruby snaps back to reality when she hears the store's front door bells chime. If she didn't know any better, she'd say the frickin' Adonis from her sexy dream just walked through the door. Reed Jackson and Brent Brown introduce themselves to Ruby as members of the local baseball team her brother, George, manages. Brent mentions they specifically came out to the store to meet George's hot, little sister.

Ruby is slightly confused when she hears Reed murmur Tap It under his breath, but then she remembers the rumor going around campus about Reed and Brent's dating game, where the two best friends compete to have a girl profess undying love to one of them. And Tap It is a winner takes all--all of what, though, Ruby has no clue.

Ruby decides that she'll play along, but according to her rules. She'll suss out if either of these players is worthy of her love and respect.

One thing is for sure, Ruby is no pawn.

Who will be Ruby's Choice?