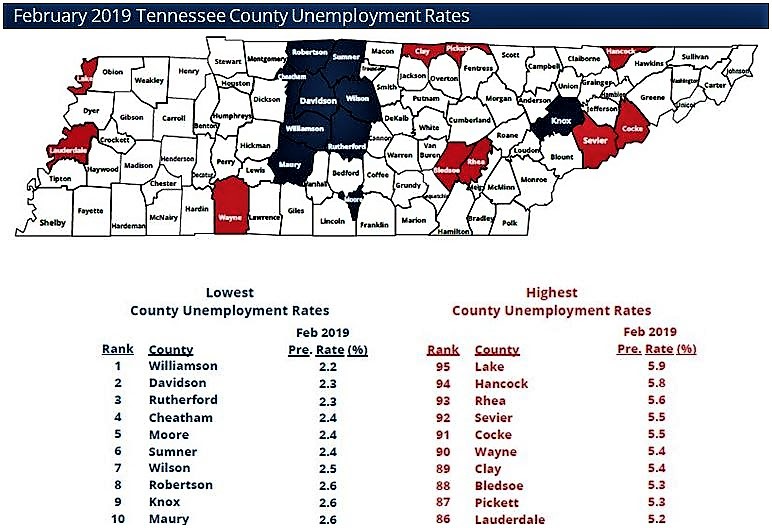 Williamson County continues to have Tennessee's lowest unemployment with 2.2 per cent, while contiguous Rutherford and Davidson Counties tie for second place at 2.3 per cent.

The Tennessee Department of Labor and Workforce Development reports that unemployment in every county improved, and that 80 of the Volunteer State's 95-counties have unemployment less than 5 percent.

Commissioner Jeff McCord said, "It is encouraging when unemployment rates drop in every county across the state."

With a rate of 5.9 percent, Lake County has the state's highest rate of unemployment for February. The latest statistic represents a decrease of 3.4 percentage points from the previous month's rate.

Hancock County recorded the second highest unemployment rate at 5.8 percent, which is a 1.5 percentage point drop from its January rate.

"It is heartening to see unemployment rates in some of Tennessee's rural counties rebound from last month," McCord said. "We will continue to align our efforts with the state's rural counties to support economic growth."

Tennessee's seasonally adjusted statewide unemployment rate reached an all-time low of 3.2 percent in February. That figure bested the previous record low of 3.3 percent, which was the state's unemployment rate between October and January.

Nationally, unemployment dropped to 3.8 percent, a 0.2 of a percentage point decrease from January's revised rate of 4 percent.

A complete analysis of Tennessee's county unemployment data for February 2019 can be found here.

Tennesseans searching for new or better employment opportunities can access more than 150,000 current job openings, as well as other job search tools on the state's workforce development website, Jobs4TN.gov.