Secretary of State Appoints Members to the U.S. Election Assistance Commission Standards Board 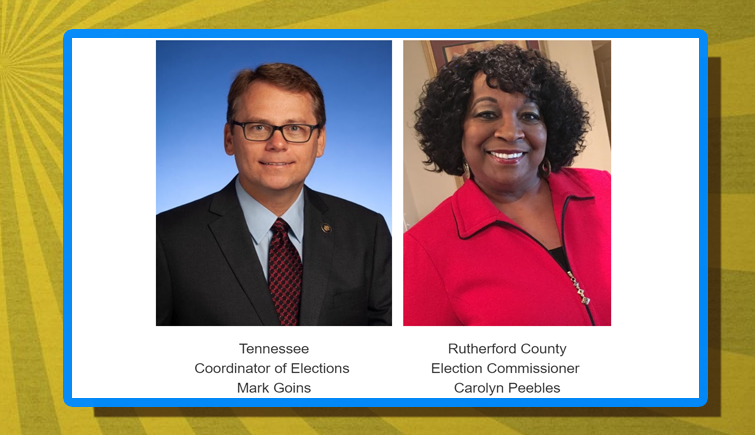 Tennessee Secretary of State Tre Hargett appointed the state's two representatives to the U.S. Election Assistance Commission (EAC) Standards Board, in compliance with the Help America Vote Act of 2002 (HAVA). One of those two lives and works in Rutherford County.

The EAC Standards Board provides advice, guidance and support to the commission on the development of Voluntary Voting System Guidelines, a set of specifications and requirements against which voting systems can be tested to determine if the systems meet required standards.

"Coordinator Goins currently serves on the board and was elected to a one-year term as chairman in 2016. I know he will continue to serve on the board with distinction and honor," Secretary Hargett said. "Commissioner Peebles is a long-time election commissioner who has served the citizens of Rutherford County with integrity and is very involved in civic activities throughout her community," he added.

Goins was appointed Coordinator of Elections by Secretary Hargett in 2009. Prior to his appointment, he served on the State Election Commission for four years. From 1996 to 2002, Goins served in the Tennessee House of Representatives, representing District 34, which included Campbell, Claiborne and Union Counties. He graduated from Lincoln Memorial University, where he received a bachelor's degree in history, and earned a law degree from Regent University School of Law.

Peebles, of Smyrna, Tenn., was appointed to the Rutherford County Election Commission in 2011 and she has served as its secretary since that time. She retired from Nissan Motor Manufacturing in 1999 and is currently the president and CEO of About My Father's Business, a consulting business. Active in several organizations in Rutherford County, including the Smyrna Noon Rotary Club, Peebles also organizes events that recognize and support veteran groups, Purple Heart recipients and Gold Star families. She earned a business management degree from Middle Tennessee State University.

The EAC Standards Board is composed of 110 members, two from each state and territory. In addition to its work on the Voluntary Voting System Guidelines, the board advises on election systems as part of the nation's critical infrastructure and cybersecurity.