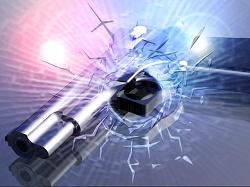 A report of shots fired at the College Grove Apartments on Lascassas Pike leaves property damage, but no injuries.

Murfreesboro Police responded to several calls just after noon Saturday. One victim reported hearing multiple gun shots and then noticed a broken window in his apartment. At least two vehicles were reportedly hit, shattering windows. At least one bullet was found lodged in the passenger side door frame of one of the damaged vehicles.

There are no known suspects at this point, but Murfreesboro Police are investigating.