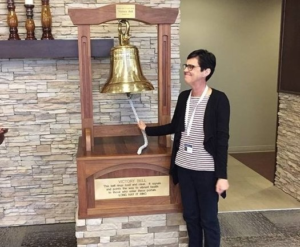 There's one last hope for Tennesseans who might benefit from a state-of-the-art cancer treatment.

The legislation would mandate that the state employee insurance program cover proton therapy at the same rate it currently pays for traditional radiation.

Retired school teacher Elizabeth Clarke contracted a rare case of tongue cancer last year and had to pay $72,000 for proton therapy out of her own pocket.

She was able to preserve her ability to eat normally by choosing the therapy, which targets a very specific area and limits radiation's exposure to healthy parts of the body.

"The side effects from the cancer that I have are so terrible," Clarke states. "I don't understand what his thinking is, because there's so much research on what it does."

In a statement, Haslam specifically opposed the mandate language in the bill and said in a statement that the "state plan currently covers many forms of radiation treatment."

Several private insurers cover at least part of the cost of proton therapy, as does Medicaid and Medicare.

Tom Welch, president of Provision CARES Proton Therapy Center in Knoxville, says the mandate would come at no additional cost to the state or taxpayers, since centers such as his say they would accept the agreed upon rate for traditional radiation.

"I have only concluded that he has bowed to the wills of the insurance lobby," Welch says. "The Speaker of the House and Lt. Gov. (Randy) McNally could call a special veto override session, to have a vote to override the governor's veto."

State Rep. Bob Ramsey (R) of Blount County - one of the sponsors of the legislation - says the plan is to wait to see what other bills the governor may veto before calling a special session.

Regardless, it is too late for Clarke and her husband, who feel lucky they had the savings to spend on her health.

"Our thoughts are with our savings," she says. "What are you saving it for if you have no quality of life?

"If you can't eat, you don't have any saliva, what good does the money do? And so, we decided that my quality was more important than having money in the bank."

Clarke says her concern lies with people who don't have coverage for proton therapy, or the savings to pay for it, since it would be impossible to secure a bank loan to pay for such treatment.