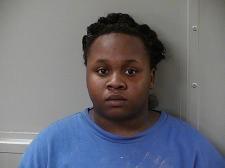 Murfreesboro Police headed to a home on Fowler Street in recent days where they conducted a "Knock and Talk" with a resident. Evidently, police wanted to speak to 19-year-old Ladayshi D. Gates about stolen property.

Once at the address, Ms. Gates gave written and verbal consent for police to enter her residence. Inside, officers located a recently stolen Yamaha dirt bike. The motorcycle was actually inside a rear bedroom.

When the dirt bike was reported stolen this past September, it was white. It had since been painted orange. The owner of the motorcycle was contacted.

Also in the home was a Kel-Tec 9mm pistol. Ms. Gates and her guest told police they did not know who the gun belonged to, although it was found under a towel in her living room.

In the kitchen, police spotted a .40 caliber Smith & Wesson handgun that was previously reported as being stolen in Murfreesboro. The gun was stored in a plastic tote.

A small safe was located in a bedroom that contained marijuana.

Because Gates was the listed tenant of the home and no one admitted to owning any of the items found, she was charged with two counts of possession of stolen property, felony vandalism and simple possession of marijuana. Ms. Gates has already bonded out of jail.

What is a "Knock and Talk?"

A "Knock and Talk" is used when a police officer has the suspicion that illegal activity has taken place at the home or structure in question or is taking place.