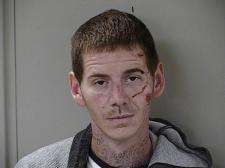 32 Year Russell C. Blackburn told Murfreesboro Police that his collection of Xanax pills were his "Capital" for him to be able to purchase tools for his trade.

Blackburn, who is from Johnson City, Tennessee, was arrested by Murfreesboro Police at the St. Thomas Rutherford Hospital Emergency Room after city officers were asked by the Rutherford County Sheriff's Office to transport the suspect to the local jail. Apparently, Blackburn had outstanding warrants waiting for his arrival at the jail.

Police found 43 Xanax pills in his pocket prior to taking him to jail. While in booking the man who has "69% Freak" tattooed to his neck told police, "The pills were for CAPITAL for him to be able to purchase tools for his trade (roofing / siding)." The report filed by Officer Skye Brown went on to state, "Mr. Blackburn had not been Mirandized at the time of his spontaneous utterance, however, he also was not questioned." The subject was charged with the Felony Possession of a Schedule Four Drug. He was also served five outstanding warrants (see below).

Past charges in Warrants: