Tennessee Residents Not Happy With Their Standard of Living 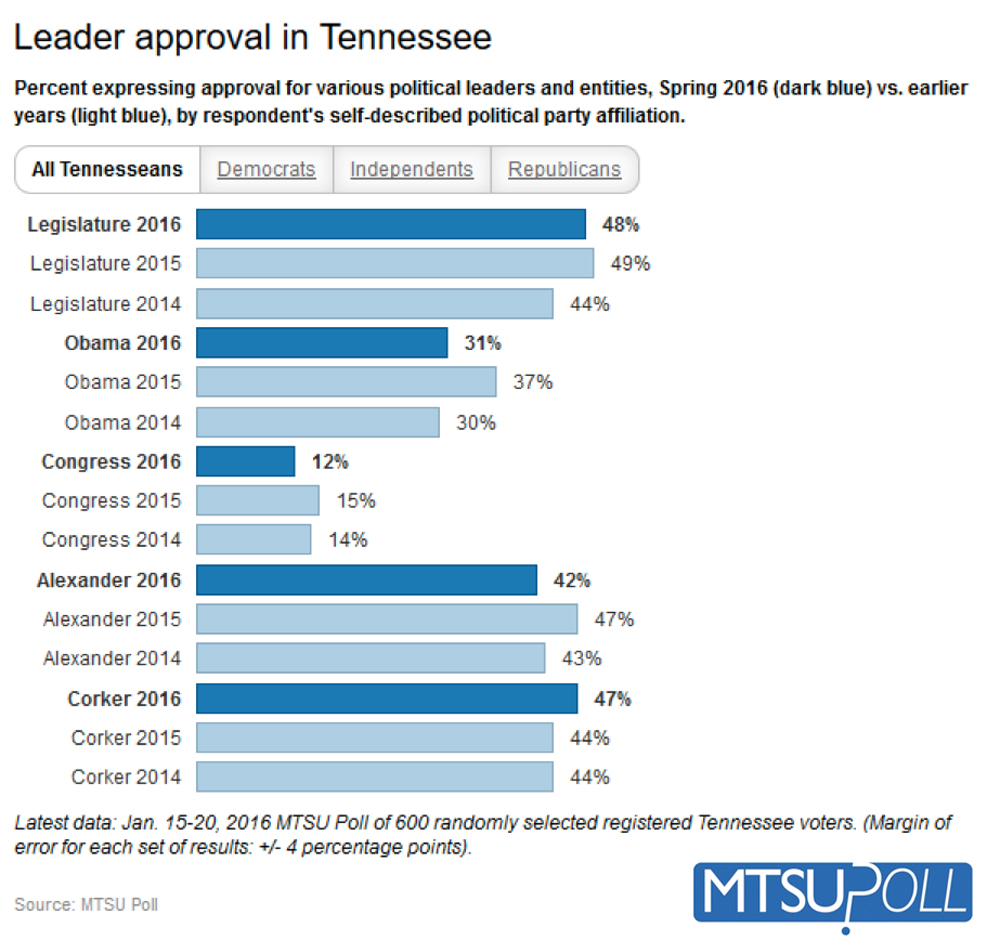 Tennessee voters are less satisfied with their standard of living and are more likely to say that it is getting worse than the nation as a whole, according to the latest statewide poll by Middle Tennessee State University.

At the same time, voters approve of state leaders overall, but disapprove of the executive and legislative branches of the federal government.

"These seeming contrasts raise interesting questions about how Tennesseans perceive the relationship between their quality of life and performance of government leaders," said Dr. Ken Blake, director of the poll at MTSU.

The poll of 600 registered Tennessee voters was conducted Jan. 15-20 and has a margin of error of 4 percentage points.

Standard of living good, not great ... and in jeopardy

Governor Haslam continues to be popular

Gov. Bill Haslam had the strongest support of any elected official asked about as part of the poll, with 58 percent of voters approving of the job he is doing and only 22 percent disapproving.

These numbers are statistically indistinguishable from the 64 percent and 18 percent who said that they approved and disapproved, respectively, of the job Haslam was doing in response to an MTSU Poll conducted at about the same time in 2015.

"Governor Haslam's popularity across party lines stands out as an exception to the usual deeply divisive and disagreeable politics," said Dr. Jason Reineke, associate director of the poll.

More Tennessee voters approve of the jobs that their United States senators are doing than disapprove.

Nearly half of Tennessee voters -- 48 percent -- say that they approve of the job the Tennessee General Assembly is doing, while only 26 percent disapprove. These percentages are statistically the same as they were a year ago.

A FOX News poll of registered voters nationwide conducted at about the same time as this year's MTSU Poll found that 45 percent approve of the job Obama is doing while 48 percent disapprove.

U.S. Congress is again the worst

Despite the relatively positive evaluations that Tennessee voters give their own U.S. senators, their views of the U.S. Congress as a whole are nothing short of abysmal.

A remarkable 80 percent say that they disapprove of Congress. Only 12 percent approve. These numbers are even worse for Congress than those found in a previous MTSU Poll about a year ago, when 70 percent disapproved and 15 percent approved.

"The United States Congress received far and away the worst overall evaluation of any elected official or government institution that we asked Tennessee voters about," Reineke said.

Previously released results from the latest poll included voter opinions about the Democratic and Republican presidential candidates; abortion regulations; gun rights; gasoline tax; and the admission of Syrian refugees to the country. Those results are available at mtsupoll.org.