The man you don't really know... 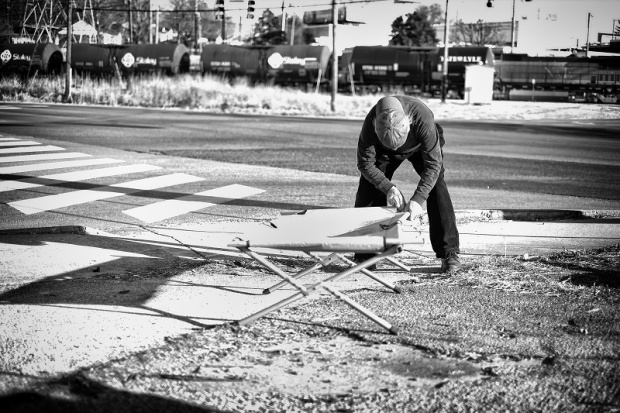 Photo by Scott Walker - See more at SmallTownBigWorld.com - - In this photo, he is setting up a cot.

A number of years ago, a security guard working at a property in Middle Tennessee, killed another man. We promised the former security guard that we would not release his name, only this audio segment and a picture of him today, years after that life altering incident. Of course, we are not releasing exactly where he is living now or even what city he is living in. If you know details about his life, we ask that you reserve comment to further protect him as he continues his life today. WGNS is passing along this story to you, because it serves as a reminder that we never truly know what someone is going through.

The former security guard told us that he stabbed a man to death. The killing was said to be in self-defense.

After such a devastating incident, regardless of how the death of another man occurred, how do you live with that? We thought maybe this short interview may help someone else going through a personal struggle of their own.

Today, the man is homeless. WGNS' Scott Walker talked to him and first asked, "What is it like being homeless for you?"

Then the hard question was asked, how have you overcome what occurred so many years ago (referring to the death)?

While it may have sounded like the man was upset by our question, he was not. In fact, the conversation continued for another 15-minutes. He told about his past, he told about his plans for the future. He also told us that despite his hardships, he keeps many of his memories and personal belongings in a storage building that he calls his office. In that building... his guitar. His guitar takes his mind off of everything.

As we were leaving a police officer pulled up and offered to give him a ride to a nearby homeless shelter so he would not have to sleep outside that night. He did not appear to be interested in going to a shelter. Shelters lack the freedom he so desired to have.