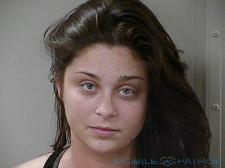 After a car drove through the yard of a home on North Maple Street, a witness followed the driver while alerting police on a cellphone. The caller told dispatch that the female driver damaged the lawn of the property.

Police caught up with Ms. Dallas Bradley at her house where they located her 2014 Mercedes Benz. Police say the 25 year old woman had slurred speech and was unsteady on her feet. They also noted that when they first spoke to her, she told them that she had been home for the past two hours. However, the police report shows that she later changed her story and admitted to spinning out "into a yard."

After refusing a field sobriety test Bradley was charged with her third DUI. Her two previous DUI convictions were both in Davidson County. The most recent DUI conviction took place on May 10, 2016 and the one prior was on December 14, 2015. So, this marks DUI number three in just eight months.

Bradley was booked under a $4,000 bond and later released. Her court date for DUI number three will be in October.