Three arrest made in Murfreesboro for Crystal Meth on Academy Street 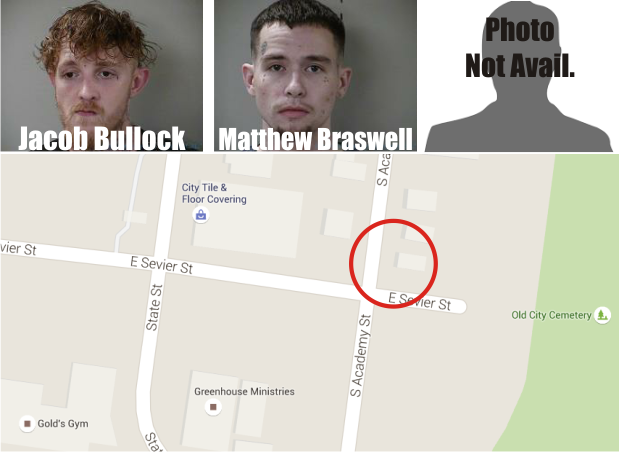 Murfreesboro Police assisted a Probation and Parole Officer on a home check Thursday that resulted in three arrests. The home visit took place on South Academy Street and involved a 28 year old man by the name of Jacob Alexander Bullock.

Once at the house, police conducted a consensual search of Mr. Bullock, which revealed two Adderall pills and a small bag of marijuana along with a Clonazepam pill. Police also found a meth pipe with what appeared to be meth residue on a table in front of where Bullock was sitting.

A police arrest report showed, "Mr. Bullock stated he had smoked meth early in the day." Police then searched the property and found a black bag containing a felony amount of Crystal Meth, fourteen Opana pills, a bag of weed, one Adderall pill and one Xanax bar.

A second and third subject at the home told police that they too had smoked Crystal Meth, but did not claim ownership of the drugs found on the property. In fact, neither Bullock, Jonathan D. Wright nor Matthew W. Braswell claimed to own the drugs found by police.

Authorities had to make a phone call to the Department of Children Services while at the Academy Street home because Bullocks' toddler child was present when police searched and found a felony amount Meth at the house.

About the Drugs Found on the Property:

Clonazepam, sold under the brand name Klonopin among others, is a medication used to prevent and treat seizures, panic disorder, and for the movement disorder known as akathisia. It is a tranquilizer of the benzodiazepine class.

Adderall can treat ADHD. It can also treat narcolepsy.

Crystal Meth has a long-lasting euphoric effect on the user. In comparison with powdered methamphetamine, crystal meth is typically purer, has a longer-lasting effect and a more powerful physiological impact. Long-term use leads to verbal problems and impaired motor skills.