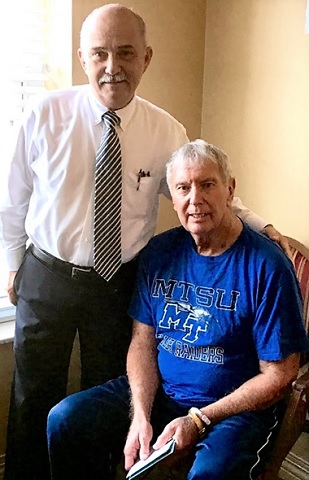 Prayers have been answered--after three-days at St. Thomas Heart, Truman Jones is home and feeling better.

After his radio broadcast from the Sylvan Park Restaurant last Tuesday (12/19/2017), Truman started to feel weak. After the show ended, Kelly, a caring waitress there got him to sit down, rest and drink some water.

After going home, Truman called his longtime friend, Dr. Dan Rudd, and a brief checkup landed him in the ER at St. Thomas West. That resulted in a bevy of tests.

His talk show on WGNS weekday mornings at 9:00 o'clock from the Sylvan Park Restaurant, has become a part of many resident's day. But as you recall--a car drove through the side of their building last month. Lisa Greer, who co-owns the popular Northwest Broad Street eatery said, "We'll be closed from Christmas through New Year, so that construction crews can make final repairs on the building."

Sylvan Park Restaurant will re-open on Tuesday, January 2, 2018, and she noted, "We all need to be there for Mr. Truman's return to the airwaves and celebrate the blessings to follow in the New Year."