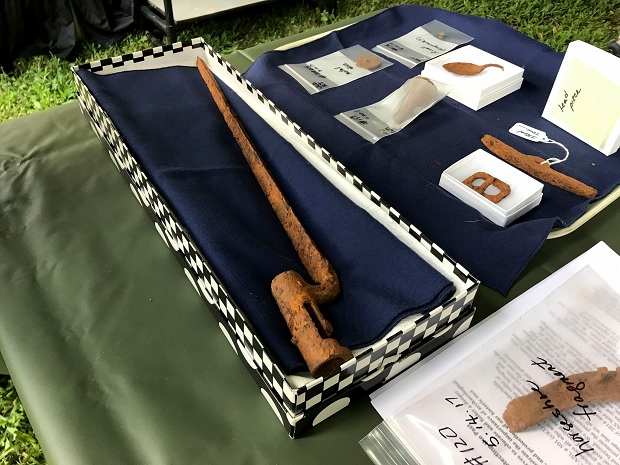 Volunteers from the Rutherford County Archaeological Society and Middle Tennessee Metal Detecting Club recovered this Civil War-era bayonet from the site of an expansion of TrustPoint Hospital in Murfreesboro. The 11-acre site is adjacent to the Stones River National Battlefield. 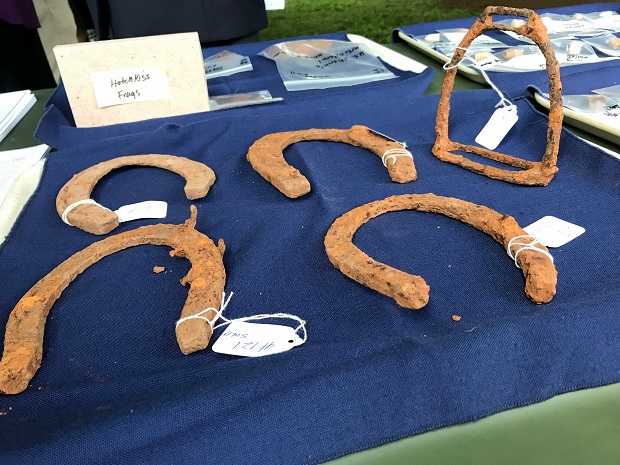 Volunteers from the Rutherford County Archaeological Society and Middle Tennessee Metal Detecting Club recovered Civil War-era horse shoes and a stirrup from the site of an expansion of TrustPoint Hospital in Murfreesboro. The 11-acre site is adjacent to the Stones River National Battlefield. 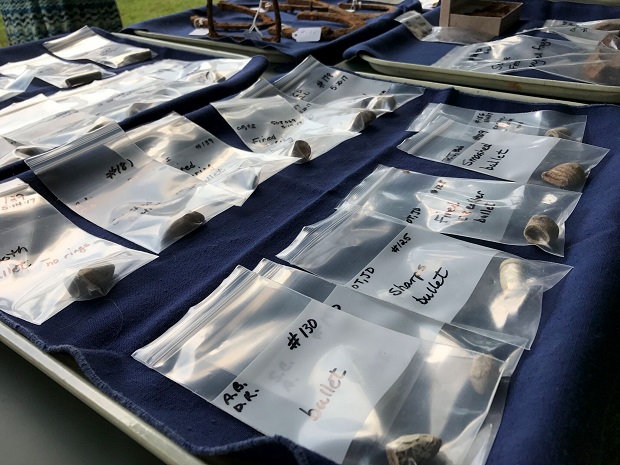 Of the more than 200 artifacts recovered by volunteers from the Rutherford County Archaeological Society and Middle Tennessee Metal Detecting Club most were Minié balls, which date to the Battle of Stones River, which took place from Dec. 31, 1862 to Jan. 2, 1863.

TrustPoint Hospital broke ground on its new addition Tuesday but before the construction started, the hospital asked the Rutherford County Archaeology Society to scan the land for Civil War artifacts.

Over two weekends in May, the local nonprofit worked with the Middle Tennessee Metal Detecting Club, currently led by Aaron Lowe, to survey the 11-acre site adjacent to Stones River National Battlefield and recover any Civil War artifacts found.

As a result of the project, more than 200 artifacts were mapped using GPS and recovered with a majority dating to the Civil War and Battle of Stones River. The items included a bayonet, horse shoes, stirrup, minie balls, artillery shell fragments and a spoon.

"I can't say enough about the Stones River National Battlefield and what they do to preserve this hallowed ground," TrustPoint Hospital CEO Dr. Jeffery Woods said, adding he will donate the artifacts to the battlefield once analysis is complete.

Union and Confederate forces clashed outside of Murfreesboro Dec. 31, 1862-Jan. 2, 1863 in the first significant battle after Lincoln issued the Emancipation Proclamation.

Although the battle itself is considered a draw by many, it forced the Confederates to withdraw from Middle Tennessee. Nearly 25,000 soldiers were injured or killed in the battle.

Over the years, parts of the battlefield have been preserved and others developed.

Woods said he wanted to do his best to honor the history of the site before TrustPoint constructed its expansion. The hospital will add more than 120,000 square feet and 116 beds, which will allow for added rehabilitation and psychiatric services.

"We hope that expanding our scope of services benefits the community," Woods said.

The first benefit was found during the archaeological survey and will continue when the artifacts are donated to Stones River National Battlefield.

"If it wasn't for his knowledge and understanding of the value of historical and archaeological research and his realization that this property had the potential to yield important information, then what we mapped and found certainly would have been lost forever," Bartel said.

In addition to the donation of artifacts, the findings from the metal detecting survey will be further analyzed using GPS and GIS technology.

Archaeologists will perform a spatial analysis of the artifacts using a GIS software program, which allows for the visualization, analysis, and interpretation of data, and give further understanding relationships and patterns, Bartel said.

The information gleaned will give historians further insight into the three-day battle, explained Bartel, who co-directed the survey with Phillip Hodge, archaeology section manager for the Tennessee Department of Transportation.

Bartel and Hodge were assisted by Director of the Geospatial Research Center at MTSU Zada Law and MTSU graduate student W. Matthew Whitten, who was the GPS/GIS field crew chief. An average of 40 volunteers per day over the two weekend survey participated in the project.

The artifacts are not only important because of what they are but also because of where they were found. The findings will help interpret "what happened in this special place," Bartel said.

"Dr. Woods donating the artifacts to the battlefield museum also means that he is preserving them for you and me, our families and the future," Bartel said.

Rutherford County Archaeological Society (RCAS), a 501(c)(3) nonprofit association based in Murfreesboro, Tennessee, welcomes all who are interested in the realm of archaeology and related fields. We are a diverse group that brings together community members, professional archaeologists, and historians to share, explore and experience the archaeology of the county and beyond. We recognize the significance of the past and the lessons it provides, and we work together to promote the preservation of our historic and prehistoric archaeological resources as well as the cultural heritage we all share.

RCAS partnered with the city of Murfreesboro to "adopt" the Old City Cemetery, which is listed on the National Register of Historic Places. The property, located at the 300 block of E. Vine Street, is one of the oldest historic sites in Murfreesboro and encompasses the buried archaeological site of the original First Presbyterian Church, its burying ground, and the city's first public cemetery. RCAS is working to conserve, restore, and develop public programs at the site.