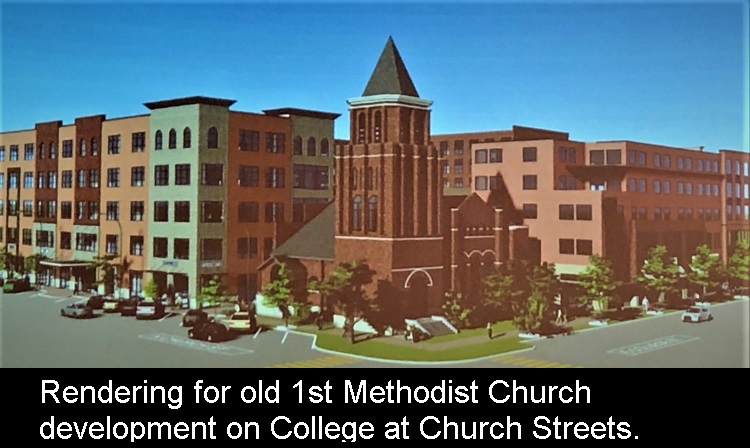 (MUFREESBORO) Plans for the proposed development of the downtown square block that was once First Methodist Church have been tweaked to better compliment the surrounding architecture.

The square block fronted on West College and North Church Streets reportedly includes a well-known uptown hotel, condos and retail-office space. The old First Methodist bell tower and sanctuary will be preserved in the $1.8-million project.

The City of Murfreesboro purchased the property from Franklin Synergy Bank in order to better control the development. It was sold to Nick Patel and One East College, LLC from Detroit.

City Manager Craig Tindall told WGNS, "The Development will preserve and incorporate the sanctuary and bell tower of the historic church. The project will include a hotel, an important amenity for the downtown area and Middle Tennessee State University. It will also include a publicly accessible parking garage that will increase the availability of downtown parking."

One East College, LLC is led by Nick Patel of Detroit, Michigan, Suri Ramanna, Nashville chairman and CEO of TRC Construction Services Inc., and Dhvanit Patel, a Tampa real estate developer. These developers have been studying the engineering and other technical aspects of the proposed development. The development group completed their purchase of the property Friday for $1.8 million. After closing, the development group will begin working with the City and the community to plan and design a project that will enhance the City's downtown and serve as a catalyst for further redevelopment efforts. Jeff Reed of Murfreesboro firm Hudson Reed and McCreary, PLLC is representing the developers.

Murfreesboro Mayor Shane McFarland noted, "We are excited about closing a finalized agreement with One East College, LLC for redevelopment of this historic location in our City. We believe this mixed-use development balances both the need for downtown economic development and preservation of this historic amenity important to Murfreesboro's character and tourism."

Redevelopment of the former Franklin Synergy site is expected to revitalize downtown Murfreesboro by adding significant commercial, retail, and residential properties into the downtown area. Over the long-term, the mixed-use development will substantially increase the assessed value of the site, which will enhance City and County property tax revenues.

The hotel is expected to include 110 rooms. The residential portion of the development anticipates approximately 55 residential units with nearby access to office and retail space with a restaurant and public parking garage. The four to six-story structure development will include more than one building with up to 200,000 square feet.

In 2016, the City reached an agreement with Franklin Synergy Bank for the acquisition of 1.87-acres of property on the corner of East College and Church Street for $ 1.55 million. At that time, promoting and preserving the downtown area, including mixed-use development had been advocated as part of the City's 20-year comprehensive plan, Murfreesboro 2035. Main Street: Murfreesboro/Rutherford favored preserving at least some of the historic structure, which dates to 1888.

Tindall added, "Our purchase of the property in 2016 gave City administrators and elected officials greater input into how this important historic location is developed. We believe this project has the opportunity to create jobs, capital and energy into the City's downtown."

Although the church sanctuary is not listed on the National Register of Historic Places, nor is it located in the City's historic district, City and community leaders sought to keep the bell tower preserved as part of the historic downtown landscape. The former First United Methodist Church building served the congregation there until 2003.

The Murfreesboro 2035 comprehensive plan recommended greater investment in the downtown area to leverage its full potential for mixed use, residential and office space, and entertainment. Preserving historic elements of downtown is seen as a lucrative aspect of future redevelopment and maintaining Murfreesboro's character.