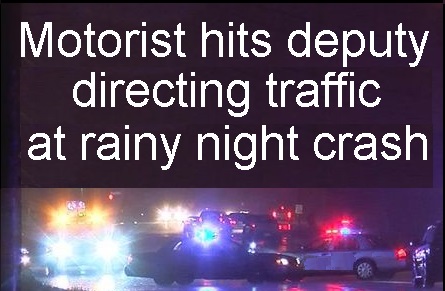 (MURFREESBORO) The Rutherford County Sheriffs deputy who was hit by a motorist while directing traffic at a crash scene on Friday (4/19/2019) night is now at home recovering.

Chief Deputy Keith Lowery said, "The deputy was treated and released from St. Thomas Rutherford Hospital. He had only been on-the-scene helping Murfreesboro Police with traffic for a few minutes when the motorist ran into the deputy."

Murfreesboro Police report that the incident began with a crash between a car and a semi on South Church Street near Savanah Ridge Drive around 9:45 Friday night. It was a rainy and cold evening, and the streets were slippery.

Details of the semi vs car crash have not been released by the Tennessee Highway Patrol as their troopers are currently investigating the crash.