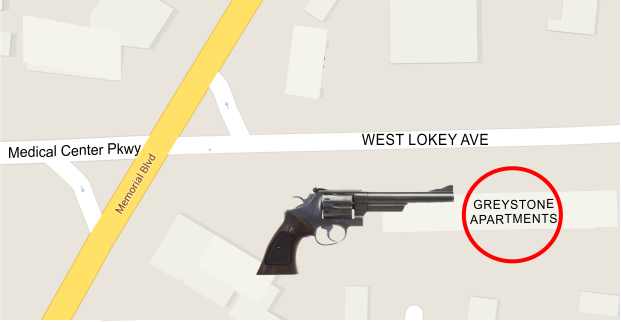 A 31-year old Lokey Avenue man is the shooting victim in a drug deal gone bad. We first reported the shooting Wednesday afternoon, which occurred just after 3 o'clock at the Greystone Apartments. Jason Tillage was found by Murfreesboro Police Officer Seth Jackson to have been shot in the leg. Tillage was taken to St. Thomas Rutherford Hospital by ambulance.

Major Clyde Adkison says the shooting, which took place in the rear of the "A" building resulted from an argument over a marijuana drug deal. According to the police report filed by Officer Jackson, the disagreement was over 50-dollars worth of marijuana.

The investigation into the shooting continues as detectives are following up on leads in the case.

Just after 3:00 on Wednesday afternoon a shooting occurred at the Greystone Apartments located at 319 West Lokey Street in Murfreesboro. The shooting happened in the rear of the "A" building which resulted from an argument over a marijuana drug deal. The crime scene was quickly secured by police and the case is under investigation.

Major Clyde Adkison with the Murfreesboro Police Department told WGNS, "The victim was shot in the leg and transported by ambulance to St. Thomas Rutherford Hospital by the Rutherford County Emergency Medical Services. The victim's name is being withheld pending notification of family members."

Police say that a possible suspect has been developed and the investigators are following up on all leads.

Do You Have Clues?