UPDATE: Shots fired in front of or towards Rutherford County Sheriff Arnold's home 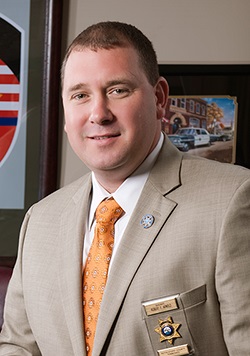 WGNS has more information on the shots fired call that was received at the home address of Rutherford County Sheriff Robert Arnold on Monday night.

Reports show that Arnold was on the phone when he heard approximately 8 gunshots around 8:18 at night. He then told his family to get on the ground for safety as he looked out the window. Arnold told Murfreesboro Police he saw a dark grey Nissan Altima drive past his house after hearing the shots.

Two nearby residents on Osborne Lane told police they too heard the shots. One resident saw a light colored sedan sitting in front of Arnold's home for about 60-seconds after the shots were heard. The car then drove away. Another neighbor was backing out of his driveway when he heard the shots. That witness told police he saw a newer model Nissan Altima that was white in color.

A total of six 22-caliber shell casings were found in the street at the intersection of Osborne Lane and Caraway Drive, directly in front of Arnolds home.

No one was injured in the shooting and the case remains under investigation.

More from the Sheriff's Office:

In a press conference Tuesday, Sheriff Robert Arnold referred to the Super Bowl half-time show. The incident against the Sheriff was violence against law enforcement, which is what Arnold was suggesting.

Sheriff Arnold said, "My comments reflect the violence and senseless killing of seven deputies in the U.S. since the show aired. My comments are an observation of the violence that has occurred but in no way is meant to offend anyone."

Here is a statement from the National Sheriff's Association that Sheriff Arnold relied on to make his comments.

The senseless killing of four law enforcement officers just this week - on the heels of the anti-police "entertainment" at the Sunday Super Bowl halftime show - reminds us that the men and women in law enforcement take a solemn oath that includes putting their lives on the line every day to protect our citizens.

Shots were fired outside the home of Rutherford County Sheriff Robert Arnold. The gunfire was reported Monday night and both Murfreesboro Police and the Rutherford County Sheriff's Office responded to the incident Monday night around 9. There were no injuries. We've learned the sheriff, his wife and children were home at the time of what's being described as a drive-by shooting. Authorities from multiple agencies are investigating the incident, but again, no one was hurt. In fact, the sheriff posted on his Facebook page the following:

Thank you for all the family and friends that have called to check on us. We are all OK.

Previous Report from the Sheriff's Office:

Several rounds from a firearm were fired at Sheriff Robert Arnold's house but the sheriff and his family were not harmed.

The family was home off Memorial Boulevard when the sheriff heard the sound of gunfire about 8:30 p.m. He notified sheriff's deputies and Murfreesboro Police.

"We are thankful Sheriff Arnold and his family were not injured," said spokeswoman Lisa Marchesoni.

Murfreesboro Police are handling the investigation.